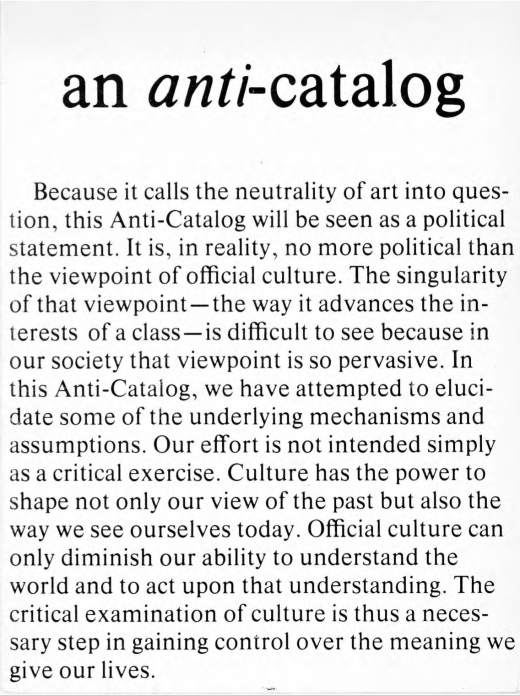 An Anti-Catalog was the work of the Catalog Committee of the group Artists
Meeting for Cultural Change (AMCC). A landmark publication of the 1970s,
its purpose was to protest the Whitney Museum of American Art’s
bicentennial exhibition, which was titled “Three Centuries of American
Art.” The Whitney show featured John D. Rockefeller III’s collection of
mainly eighteenth and nineteenth-century American art–a collection that
featured only one African American and one woman artist.

The Catalog Committee, which consisted of fifteen artists and two art
historians, spent almost a year producing an eighty-page book containing
articles and documents. Originally conceived as a critique of art
historian E.P. Richardson’s catalog for the Whitney exhibition, the
committee evolved ideas for pictorial essays that would encompass native
American art, African-American art, art by women, critiques of pervasive
class bias in the art world, and critical examinations of cultural
institutions. As the committee wrote in its description of its project,
“we share the belief that culture should no longer exist merely as an
extension of the economic interests or the personal ‘tastes’ of the
wealthy and powerful. Nor can we hope to transform culture outside of a
struggle to transform the society from which it springs.” Strong words
that have lost little of their relevance for today’s cultural scene.