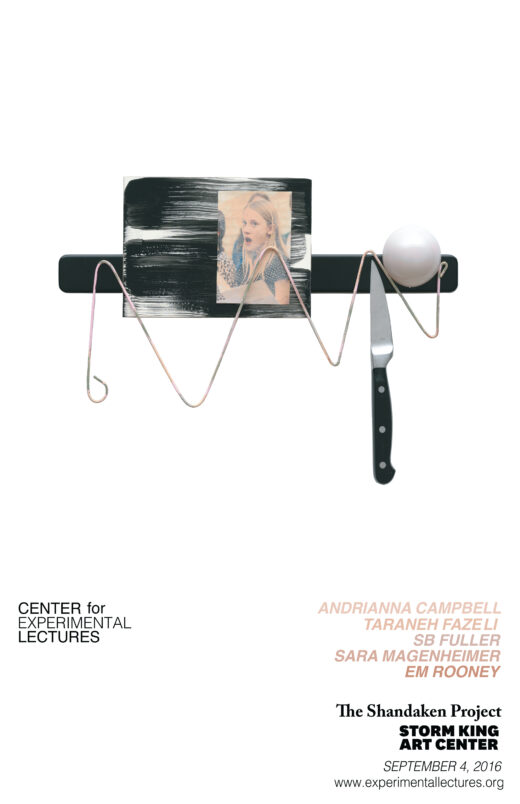 Andrianna Campbell begins the day at 3pm at Storm King Art Center. Campbell, who was a resident of The Shandaken Project at Storm King earlier this summer, will offer a guided tour of speculative artworks by over 20 contemporary artists. In her many years of making inquiries about contemporary cultural production, Campbell has formed significant relationships with the artists invited to participate in this experimental narrative. Campbell will present the speculative artworks, a collection that in sum offers a personal history and an imagined future, as stops on a walking tour. She addresses the aesthetics and histories that constitute a sculpture garden, as explored through the potential of this invisible work. Participating artists include Lucas Blalock, Antoine Catala, Ian Cooper, David Kennedy Cutler, Danielle Dean, Shannon Ebner, Andrea Geyer, Ethan Greenbaum, Steffani Jemison, Butt Johnson, Barbara Kasten, Thomas Lawson, Simone Leigh, Eva Lewitt, Glenn Ligon, Shana Lutker, Krm Mooney, Ken Okiishi, Rachel Rose, Hanna Sandin, Laurie Simmons, and Nari Ward.

Beginning at 7:30, the Center for Experimental Lectures will present a series of newly commissioned lecture-performances in the round by Taraneh Fazeli, Sb Fuller, Sara Magenheimer, and Em Rooney. In a departure from previous formats, these shorter presentations will unfold in succession with the audience surrounding the performer. Employing sculptural components, live and recorded voice, and movement, these lecture performances mine the possibilities produced by the absence of a fixed front and audience orientation.

Em Rooney will offer an audio-essay on the libido and American politics through the lens of personal relationships with popular media. This series of fictional and non-fictional vignettes will be embodied with props and prompts by the choreographer Mariana Valencia.

Sb Fuller, in a lecture on cinematographic masochism and curatorial transparency, will introduce H/S, a new, mobile, collaborative exhibition space.

In relation to her current curatorial project “Sick Time, Sleepy Time, Crip Time: Against Capitalism’s Temporal Bullying,” Taraneh Fazeli considers temporalities of debility, disability, aging, and rest as resistive to capitalism and other forces of oppression. She invites those in attendance to consider our functional unity with other organism’s umwelts (environment worlds), gesturing towards acts of care for other beings—both human and non-human.