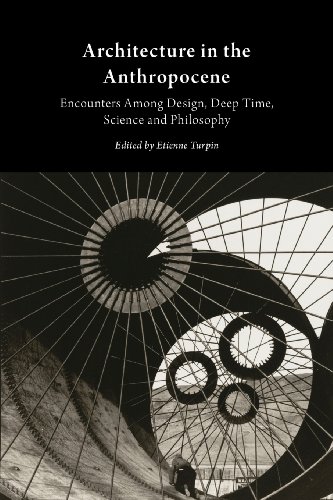 Architecture in the Anthropocene (PDF)

Architecture in the Anthropocene: Encounters Among Design, Deep Time, Science and Philosophy, edited by Etienne Turpin, brings together a provocative series of essays, conversations, and design proposals that attempt to intensify the potential of the multidisciplinary discourse developing in response to the Anthropocene thesis for contemporary architecture scholarship and practice.

Research regarding the significance and consequence of anthropogenic transformations of the earth’s land, oceans, biosphere and climate have demonstrated that, from a wide variety of perspectives, it is almost certain that humans have initiated a new geological epoch, their own. First labeled the Anthropocene by the chemist Paul Crutzen, the consideration of the merits of the Anthropocene thesis by the International Commission on Stratigraphy and the International Union of Geological Sciences has also garnered the attention of philosophers, historians, and legal scholars, as well as an increasing number of researchers from a range of scientific backgrounds.

“Although architecture has a sense of its place within broader socio-political and cultural systems, it has not, until very recently, acknowledged itself as part of the earth’s geology, despite the fact that it is a forceful geological agent, digging up, mobilizing, transforming and transporting earth materials, water, air and energy in unparalleled ways. With the Anthropocene thesis, architecture is called to think itself as a geological actor capable of radically transforming the earth’s atmosphere, surface morphology, and future stratigraphy. This extraordinary and provocative collection of essays, design projects, and conversations plots out what the planetary condition of the Anthropocene might mean for architecture, architectural theory, and design practice.” – Lindsay Bremner, Director of Architectural Research, University of Westminster

“The ground on which we stand-physically, conceptually, even ontologically-is becoming increasingly unstable. The same goes for our political, scientific, and planetary atmospheres. The histories of “civilisation” and “nature” are crossing paths. But how to live up to the transformation called the Anthropocene? Vectors of critical thought that align planetary politics with questions of the planning, organisation, the design of physical space and the making of environments have become urgent. This volume brings leading and emerging scholars and design practitioners together, allowing the most exciting edges of new research to speak to each other. It is a major contribution to an emerging field of study and will shape the direction of the expanded field in architectural and spatial research.”
– Anselm Franke, Head of Visual Arts and Film Department, Haus der Kulturen der Welt

Editor Bio
Etienne Turpin, Ph.D., is principal director of anexact office, a design research practice committed to multidisciplinary urban activism, artistic and curatorial experimentation, and applied philosophical inquiry. Etienne is also a Vice-Chancellor’s Postdoctoral Research Fellow at the SMART Infrastructure Facility, Faculty of Engineering and Information Sciences, University of Wollongong, where he is director of the Geosocial Intelligence for Urban Livability and Resilience Research Group; he is also an Associate Research Fellow at the Institute for Social Transformation Research, Faculty of Law, Humanities and The Arts, University of Wollongong. With the support of these academic appointments, Etienne lives and works Jakarta, Indonesia, where he co-ordinates the project PetaJakarta.org to help co-produce strategies of community resilience among informal settlements of the urban poor facing the combined violence of rapid development and climate change.