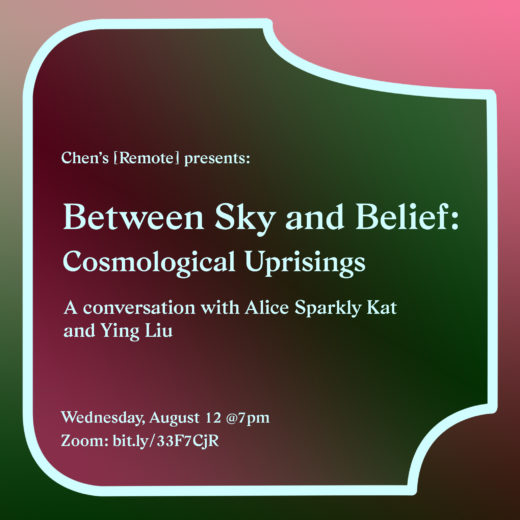 Between Sky and Belief: Cosmological Uprisings

“Between Sky and Belief: Cosmological Uprisings”, a conversation between Alice Sparkly Kat and Ying Liu. The program consists of individual presentations on practices and research that take a critical approach to astrology, divination and other frameworks that decode futurity. The conversation dissects the historical and contemporary applications of astrology to narrate our current sociopolitical reality and to fathom our universe.

Alice Sparkly Kat
Alice Sparkly Kat is a queer, PoC astrologer. They use astrology to re-chart a history of the subconscious, redefine the body in world, and reimagine history as collective memory. Their astrological work has inhabited MoMA, Philadelphia Museum of Art, and Hauser and Wirth. They’re friendly, located in Brookyn, and available for readings in person or by phone at www.alicesparklykat.com! Follow them on Instagram at @alicesparklykat for astrology memes and content.

Ying Liu
Ying Liu is a Brooklyn-based multimedia artist born and raised on a small island named Zhoushan in the East China Sea. Her evening-length, hybridized works often mix consumer technology such as VR, GoPro and GPS, and fuse mediums including theater, dance, video, and performance art with DIY props and an exuberant sense of play.