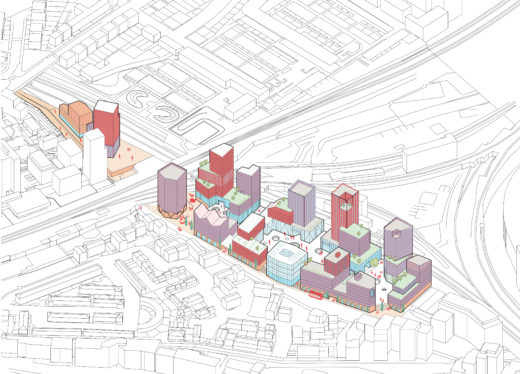 What might urban development look like in a de-growth economy? Is it possible to develop housing without encouraging speculation? How could communities and local businesses reclaim their cities? Karakusevic Carson Architects presents the Camley Street Community Land Trust (CSCLT), a possible model for a future based on a more equitable and sustainable form of urban production. Based on a live concept project in Camden, North London, the CSCLT is an ambitious, multi-actor project for a neighbourhood bringing together truly affordable housing, food production, logistics and light industry. In contrast to the inationary model of large speculative development enabled by ows of international capital, the CSCLT is rooted in a long-term model providing an alternative future both for development nance and urban co-location. At the heart is an multi-functioning architectural hybrid, a concept that empowers local interests, responds to local needs and champions community leadership.

In 2014, Karakusevic Carson Architects were approached by members of the Camley Street community who were concerned that the area in which they lived and worked was in danger of being lost to private development. The three-hectare site is one of the last in central area of the city that maintains food processing and manufacturing supporting c.500 local jobs and 30 businesses that includes; fresh sh supplies, a large butchers, granola production, textiles manufacturing, model making, car repairs and building suppliers.

In response, residents and businesses self-organised and formed a Community Land Trust (CLT). In this co-operative model public land is offered and the community become stewards, managing the scheme and incubating enterprise and directly reinvesting rents from these activities back into the trust to maintain its affordability.

It is presented at Oslo as an example of a possible future where public urban land and the typological hybrid work together to enable a new future where urban value is measured in the needs and potential of citizens rather than speculative prot.