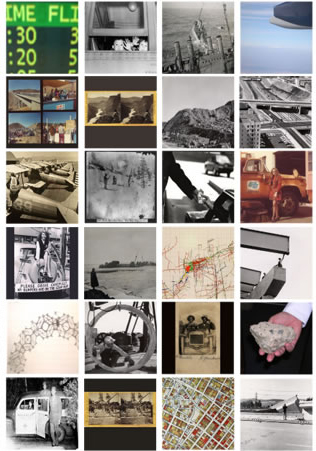 Code: Survey was developed for the Morphosis-designed Caltrans District VII Headquarters in downtown Los Angeles as an architectural and digital installation. Whereas the building houses a grid of 168 glass panels of images related to transportation, each panel engraved with an alphanumeric code, the website is its searchable counterpart of photographs, codes and an index of keywords. Images, texts, film footage and audio from interviews with Caltrans employees as well as native Californians intermingle in Green’s website as a dynamic archive that undermines and complicates our expectation of searching any form of place. Code: Survey exists as a process allowing temporary imaginary inhabitation of, or passage through, an unknowable place. In this incarnation, the process has been applied to what is known as California, although other locations can be used to yield different possibilities.

The surveying process in this instance demonstrates a form of tracing used by a highly sensitive team of polycarpous and polyglot polyhistorians, who over three years developed a methodology that encompassed searching, collecting and exploring a variety of clues based on spoken or sung words, written words and keywords, sounds, films and images.  Photos, images, diagrams and maps provide an index of previous moments or intentions, even if their contents aren’t easily identifiable or understood by the time they are encountered.  They can be examined nonetheless. Speculations can form, as well as informed attempts to decipher.  Codes were assigned. Stories multiplied. The process of assembly can continue in one’s imagination.

Code: Survey can be located as a website and became accessible internationally in 2006 (http://www.dot.ca.gov/dist07/code_survey/intro.htm).  A physical version of Code: Survey, made as a structure of glass, film and steel, can be found in the Caltrans Headquarters of the California Department of Transportation in downtown Los Angeles.  The work was commissioned by Caltrans and the architect Thom Mayne of Morphosis.

Other Planes of There: Selected Writings
Renée Green
Format
Subjects