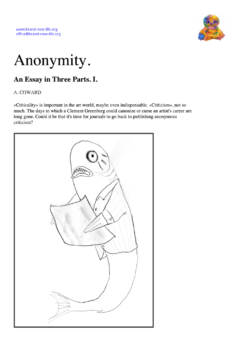 Anonymity. An Essay in Three Parts. I. Brand-New-Life Magazine
A. Coward, Lucie Kolb, Pablo Müller, et al.Barbara Preisig, Judith Welter, Sabo Day, FLX Labs
PublisherBrand-New-Life2018
Format
Subjects
Keywords
“Criticality” is important in the art world, maybe even indispensable. “Criticism”, not so much. The days in which a Clement Greenberg could canonize or curse an artist’s career are long gone. Could it be that it’s time for journals to go back to publishing anonymous criticism? 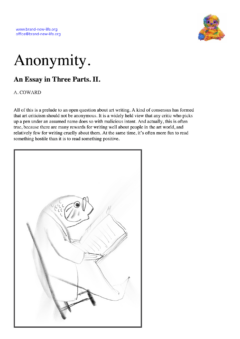 Anonymity. An Essay in Three Parts. II. Brand-New-Life Magazine
A. Coward, Lucie Kolb, Pablo Müller, et al.Barbara Preisig, Judith Welter, Sabo Day, FLX Labs
PublisherBrand-New-Life2018
Format
Subjects
Keywords
All of this is a prelude to an open question about art writing. A kind of consensus has formed that art criticism should not be anonymous. It is a widely held view that any critic who picks up a pen under an assumed name does so with malicious intent. And actually, this is often true, because there are many rewards for writing well about people in the art world, and relatively few for writing cruelly about them. At the same time, it’s often more fun to read something hostile than it is to read something positive. 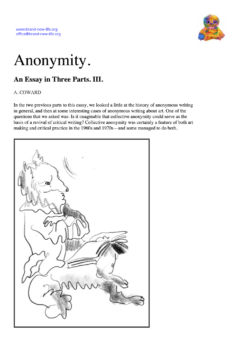 Anonymity. An Essay in Three Parts. III. Brand-New-Life Magazine
A. Coward, Lucie Kolb, Pablo Müller, et al.Barbara Preisig, Judith Welter, Sabo Day, FLX Labs
PublisherBrand-New-Life2018
Format
Subjects
Keywords
In the two previous parts to this essay, we looked a little at the history of anonymous writing in general, and then at some interesting cases of anonymous writing about art. One of the questions that we asked was: Is it imaginable that collective anonymity could serve as the basis of a revival of critical writing? Collective anonymity was certainly a feature of both art making and critical practice in the 1960s and 1970s—and some managed to do both.