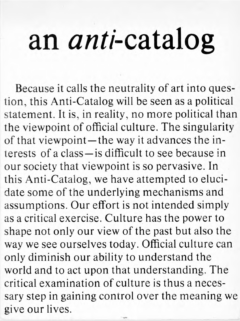 De-Colonizing Art Institutions: Artists’ Book On Curating
Dorothee Richter, Ronald Kolb, Maria Thereza Alves, et al.Song-Ming Ang, Priscila Arantes, Baltensperger + Siepert, Fabiana de Barros, Mabe Bethônico, Flavio Cury, Jimmie Durham, Gabriel Flückiger, [27 More...]
PublisherOnCurating.org2017
Format
Subjects
Keywords
For the Oncurating Issue 34, we asked artists, theorists, and researches to send us their proposals for a decolonized art practice, or how to deal with institutions in that regard. The 34 invited artists were given a carte blanche to contribute to the topic of decolonising art institutions. The aim: to provide a platform for a multiplicity of voices from the arts. These voices would propose an image of a decolonised art practice, all the while raising questions with regard to how one can engage with pre-existing institutions in a congruent manner. The material was then displayed as printouts by ...

In the Heart of the Country
Ken Jacobs, Zhanna Kadyrova, Polina Kanis, et al.Leszek Knaflewski, Olga Chernysheva, Anne Collier, Abraham Cruzvillegas, Julia Dault, Oskar Dawicki, Nathalie Djurberg, Jimmie Durham, [75 More...]
PublisherMuseum of Modern Art in Warsaw2013
Format
Subjects
Keyword
The exhibition “In the Heart of the Country” is the first comprehensive presentation of the international collection of the Museum of Modern Art in Warsaw. In a relatively short time—the Museum was established in 2005—the institution has acquired over 300 works. First and foremost, these are works purchased as part of the Ministry of Culture and National Heritage’s “International Collections of Contemporary Art” programme, as well as donations and temporary loans from artists, private individuals and businesses. Many of the collected works were commissioned by the Museum for its exhibitions and public projects (such as pieces by artists like Sanja Iveković, Zbigniew ...

Material dOCUMENTA (13): 100 Notes, 100 Thoughts
Jimmie Durham, Chus Martínez, Bettina Funcke, et al.Katrin Sauerländer, Cordelia Marten, Stefanie Drobnik, Sam Frank, Astrid Wege, Leftloft
PublisherHatje Cantz2012
Format
Subject
Keywords
This title will be available soon. This study was begun in Venice, the birthplace of tourism, and the souvenir made for the tourist trade. But we will not consider objects; that is another discussion. Only stuff—material. If I am treated badly by some airline staff I may want to write a letter of complaint. If I write this letter with a pen or pencil and my own hand, in script, a secretary will throw it away without anyone having read it. She will know that it was written by a crazy guy. If I use a typewriter the result will be ...