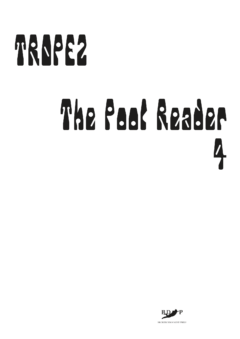 The Pool Reader 4 The Pool Reader
Sofia Duchovny, Barbosa, Damjanski, et al.Bitsy Knox, Line Finderup Jensen, Musa Okwonga, Philip Wiegard, Jasmine Reimer, Vivi Abelson, Jessica,,,, Korp, Elif Saydam, [9 More...]
PublishersBroken Dimanche PressTropez2020
Formats
Subjects
Keywords
The British one-hit wonder Richard Sanderson is best known for singing about love, a kind of love constructed only for half way strangers, imaginations that he projects onto a single person. She could be everything! She could be the real fantasy. He could live in his dreams, so dreams could become reality, he wants the dream to be true so badly, he searches for the reality in it, he dissects it, he rethinks it, and he searches after it where he knows that it’ll be found. In it he sees only what confirms his search, the reality of it becomes ...