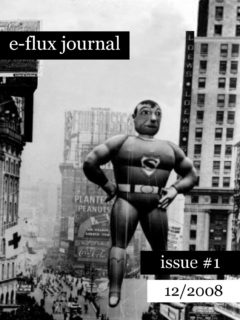 e-flux Journal #1 e-flux journal
Julieta Aranda, Brian Kuan Wood, Anton Vidokle, et al.Julieta Aranda, Brian Kuan Wood, Anton Vidokle, Staš Kleindienst, Dieter Lesage, Carol Yinghua Lu, Metahaven, Nataša Petrešin-Bachelez, [4 More...]
Publishere-flux2008
Format
Subjects
Keywords
Following the recent terrorist attacks in Mumbai, doctor and New Age guru Deepak Chopra commented on CNN that perhaps the worst thing for terrorist groups would be for someone like President-elect Obama to befriend the Muslim world and turn them against terrorists—simple as that! Such a statement is symptomatic of the idea that power today should, whenever possible, be exercised through attraction and seduction rather than through direct coercion. Joseph Nye, one of the intellectual fathers of neoliberalism, has termed the genteel, salesman-like diplomacy that emerged after the Cold War “soft power”: the ability of a political body such as ... 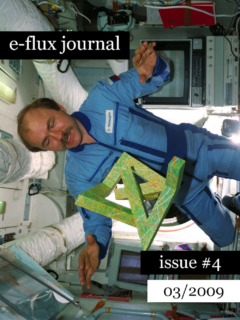 e-flux Journal #4 e-flux journal
Julieta Aranda, Brian Kuan Wood, Anton Vidokle, et al.Julieta Aranda, Brian Kuan Wood, Anton Vidokle, Michael Baers, Elena Filipovic, Boris Groys, Silvia Kolbowski, Dieter Lesage, [2 More...]
Publishere-flux2009
Format
Subjects
Keywords
Much of the tension within the sphere of contemporary art is generated by the insularity of the art context, which often prompts artists to be on the lookout for other situations. The museum is too exclusive, the artwork overly framed, the discourse too removed from everyday life. And yet, attempts to liberate artworks from their conditioning often finds them still connected to the art context by a rigid tether. Boris Groys has suggested that in order for art to be shown in public spaces and still maintain its status as art, it must by necessity be more conservative than art ...