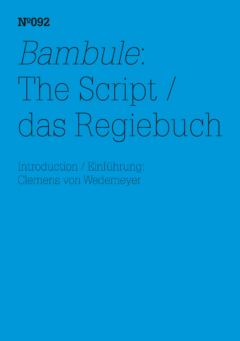 Bambule: The Script dOCUMENTA (13): 100 Notes, 100 Thoughts
Clemens von Wedemeyer, Bettina Röh, Ulrike Meinhof, et al.Eberhard Itzenplitz, Carolyn Christov-Bakargiev, Chus Martínez, Bettina Funcke, Katrin Sauerländer, Cordelia Marten, Melissa Larner, Sam Frank, [1 More...]
PublisherHatje Cantz2012
Formats
Subjects
Keywords
What is printed in this notebook is film material, if not in the physical sense of celluloid, chemicals, video cassettes. For me, film material is everything that accumulates during a film project and accompanies it. That includes rejects or what was merely thought of and remained notes. Many things shape a film, not just the script but also the working environment and production processes, self-censorship and prohibitions. Certain of one’s aims remain unfulfilled, falling victim to constraints, or only in post production is the right tone found. The script is the working template for director, cameraman, and actors during shooting. Why was ...