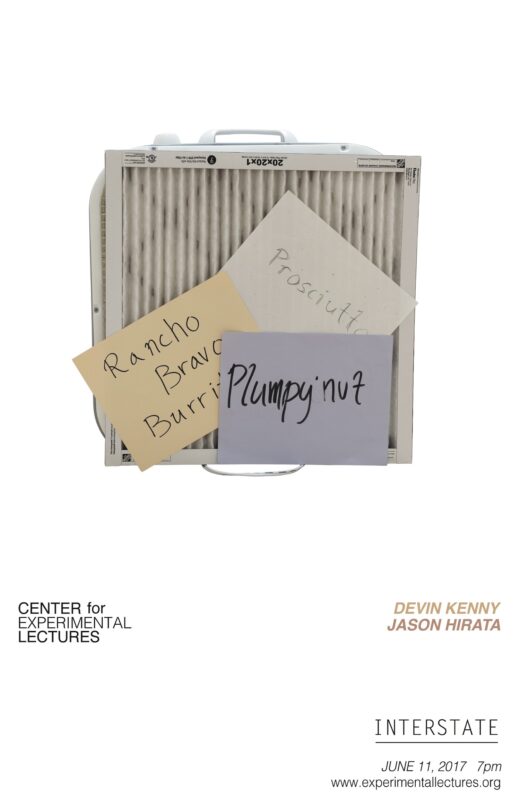 The Center for Experimental Lectures invites you to Interstate Projects for our first event of 2017, a presentation of two new lecture-performances by Devin Kenny and Jason Hirata.

Devin Kenny’s work for the Center for Experimental Lectures extrapolates a critical understanding of network aesthetics and network culture as intrinsic to the Black experience. His lecture focuses on Black/American culture before and after telecommunication technologies in connection with legacies of the African diaspora. Keywords : Henry Box Brown, Juneteenth, quilt codes, graffiti, Black Twitter, analog fractals.

Jason Hirata’s lecture emerges from research into scholarship, artistic representations, and military archives of Japanese Internment during World War II. Beginning with a menu from the Puyallup Assembly Center in Washington State, his work engages the lecture as a form to contemplate the conventions of the concentration camp, and the spectacle of the war machine through their manifestations in nutritional and culinary bureaucracies and material histories.

Devin Kenny is an artist and writer working across several mediums. He is an alumnus of the Whitney Independent Study Program, and UCLA, and has had work featured in exhibitions at MoMA PS1 and the Hammer Museum, with performances in the Netherlands, Germany, Mexico, and numerous venues in the US.

Jason Hirata’s recent work investigates the reproduction of power through food and culture under global capital through research, sculpture and drawing. He has shown at the Henry Art Gallery, 67 Gallery, American Medium, among others, and was the recipient of the 2015 Brink Award from the Henry Art Gallery.