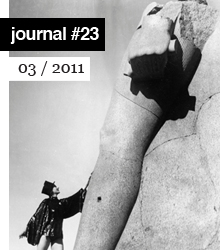 The Gulf War did not take place, as Baudrillard notoriously put it. But now something else has taken place, and it did not happen in the doldrums of virtuality, but in the streets and squares of Tunis, Cairo, Benghazi, and elsewhere. It seems that the prospect of an all-encompassing condition of techno-saturated anorexia, perhaps appropriate for a time when communications networks and the tools for producing reality were situated in the hands of governments and telecommunications tycoons, has been inverted. No one could have foreseen the perseverance of reality over mass-deception, the weaponization of communications networks in the hands of ordinary people, and the discovery of commonality where it had surely been obliterated by systems far more oppressive than anything a camera or computer could ever devise…

Some Experiments in Art and Politics
Bruno Latour

Wolf and Vampire: The Border Between Technology and Culture
Mona Mahall

Back to the Future: Report from Hungary
Lívia Páldi

Camels vs. Google: Revolutions Recreate the Center of the World
Jon Rich