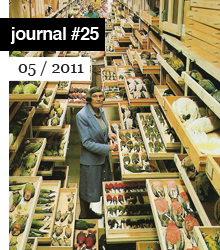 Surprisingly few people have flinched at the way Osama bin Laden was disposed of. Even for the most wanted man in the world, one imagines that it would have been both ethically and politically more expedient to stage a trial before his execution, similar to the way it was done in the case of Saddam Hussein. But such an expectation would risk overlooking the degree to which, for states and individuals alike, much political activity now takes place outside of official channels and beyond the jurisdiction of formal legal bodies…

In Conversation with Julian Assange, Part I
Hans Ulrich Obrist