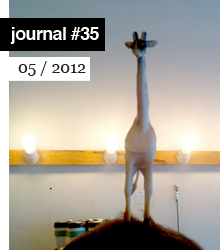 What if history actually did end with the fall of communism and the end of the cold war, as Fukuyama claimed, and we are now enjoying some kind paradise of liberal democracy with no better political framework to strive towards? Or, what if a recognition of exploitation and social inequities actually is leading to a massive workers’ revolution that will reclaim the means of production and lead to a more equal distribution of resources and power—whether Marxist, democratic, or otherwise? Indeed, we are unsure whether we are still inside of an idea of progressive social emancipation and human self-realization that defined the modern era, or whether we have truly, actually surpassed these questions. The popular uprisings of 2011 only complicate the issue further with their ability to mobilize massive social movements with a near-total absence of political ideology in any traditional sense. It almost seems as if the entire world got the gist of all the postmodern and postcolonial ideas that came after 1968 to theorize an era of dreary political prospects…

After the Last Man: Images and Ethics of Becoming Otherwise
Elizabeth A. Povinelli

Under the Gaze of Theory
Boris Groys

Eikonomia: Notes on Economy and the Labor of Art
Sotirios Bahtsetzis