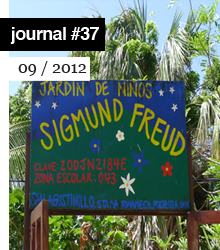 It is hard to avoid the feeling these days that the future is behind us. It’s not so much that time has stopped, but rather that the sense of promise and purpose that once drove historical progress has become impossible to sustain. On the one hand, the faith in modernist, nationalist, or universalist utopias continues to retreat, while on the other, a more immediate crisis of faith has accompanied the widespread sense of diminishing economic prospects felt in so many places. Not to mention the ascension of populist and sectarian orders that now mire many of the popular revolutions of 2011 in the Middle East. Things just don’t seem to move. But as historical time comes to a standstill, lived time accelerates at a dizzying pace, leading one to wonder whether this frantic accumulation and acceleration on the level of working, social, and private life actually serves to compensate for the sense of drift and indeterminacy felt in public and political life…

Captives of the Cloud: Part I
Metahaven

There’s Nothing to See Here: Erasing the Monochrome
Amelia Groom