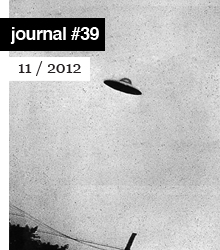 When Hurricane Sandy tore through the Eastern US on the eve of the presidential elections, it seemed that a certain fatigue had found a strange mirror image in the libidinal force of completely absurd weather patterns, that a tired resignation to a lack of options in the political sphere had actually mutated into an apocalyptic revolution in the atmosphere. It was as if a negative omen had come with the prospect that the next global insurgency could arrive by way of non-human forces altogether—totally external to markets, but also to people…

Emancipation of the Sign: Poetry and Finance During the Twentieth Century
Franco Berardi Bifo

Democracy: A Knot of Hope and Despair
Jodi Dean