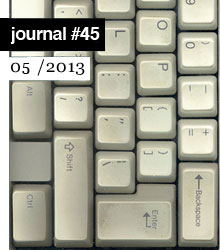 In April, Mark Epstein from the Cooper Union Board of Trustees announced the end of fully subsidized education across the college’s art, engineering, and architecture schools. It was a closing chapter in a ferocious battle in the college since it announced its insolvency in 2011. But it may be the beginning of something else…

English and All That
Martha Rosler

Towards a Post-Secular Aesthetics: Provocations for Possible Media in Afterlife Art
Abou Farman

We Are the Weather
Brian Kuan Wood

Art Workers: Between Utopia and the Archive
Boris Groys