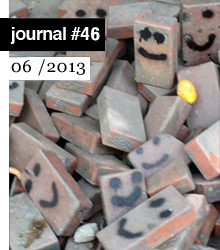 Where did the critical tradition of art go? Maybe that’s the wrong question. Because we know the answer. It went into spectacle. It went into finance. It got privatized, democratized, scrutinized, defunded, bureaucratized, then professionalized. The critical stick became a seductive carrot. But maybe we don’t have to see this only in terms of a fall from grace. Maybe this is the time for a long-overdue realism that an art field still in the thrall of modernist humanism struggles to avoid recognizing. Isn’t it strange how we are subjected to the most extreme aspects of this new order and yet still suppress its most emergent qualities? What if we suspend the guilt of lapsed certainties and good-person compulsions for just a moment and take a look in the mirror? What would we see? We might see velocity-driven psychotics ravaged and dragged through sky and sludge, crying from revolution teargas and boring discussions at the same time. We might see uneducated beasts using their own bodies to mash culture with physics with economics with mysticism. We might see a strange new form of human tumble out. For the Summer 2013 issue of e-flux journal, we are very pleased to present Gean Moreno’s guest-edited issue on accelerationist aesthetics. Read it at the beach!..

Some Trace Effects of the Post-Anthropocene: On Accelerationist Geopolitical Aesthetics
Benjamin Bratton

Cosmic Exo-Surprise, or, When the Sky is (Really) Falling, What’s the Media to Do?
Debbora Battaglia