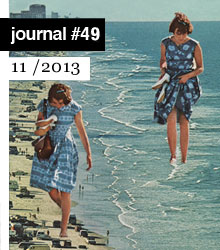 In 2003, Slavoj Žižek made a very prescient observation to explain how the US under George Bush used a plot twist borrowed from Alfred Hitchcock to justify the invasion of Iraq. He called it the “Iraqi MacGuffin.” Now, what is a MacGuffin? Exactly. The example Žižek gives: Two men run into each other on a train. One carries a suitcase. When asked what the suitcase contains, the carrier replies, “It is a MacGuffin.” But what is a MacGuffin? “It is a device used for killing leopards in the Scottish Highlands.” But there are no leopards in the Scottish Highlands. “Well, then that’s not a MacGuffin, is it?” Saddam Hussein’s weapons of mass destruction were never found, and somehow the fact that they did not actually exist was secondary to their enormous value as a narrative device for producing a precondition for going to war in Iraq…

Too Much World: Is the Internet Dead?
Hito Steyerl

On the Format of the Divine
Gleb Napreenko

The Insurgents, Part II: Fighting the Left by Being the Left
Nato Thompson