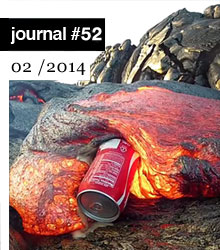 Neoliberalism began as the idea that economic rationality could be applied as a model of governance in place of political ideology. No more authoritarianism. Just the rational calculation of people’s needs and wants. But now we realize that needs and wants are not rational. They are crazy. And they take place on such vastly different scales that, without any political idea to stabilize desires and render them accountable—even simply in the sense of being legible and comprehensible—we are faced with nothing but irrationality as a governing order. Even logistical mechanisms are only the infrastructural bracketing of a rational order that is actually and profoundly not…

The Labor of the Inhuman, Part I: Human
Reza Negarestani

The Rich Should Be Richer
Ane Hjort Guttu

National Heterologies: On the Materiality and Mediality of Flags—Mali 2013
Tom Holert

The New Way of the World, Part II: The Performance/Pleasure Apparatus
Pierre Dardot and Christian Laval