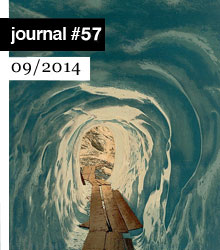 Francis Fukuyama, and even his mentor Alexandre Kojève before him, warned of boredom, stasis, and homogeneity being characteristics of the “universal homogenous state” that would mark the end of history. As Fukuyama put it: in the post-historical period there will be neither art nor philosophy, just the perpetual caretaking of the museum of human history. And indeed, the phase of contemporary art has also been characterized in discussions over recent years as a reformatting of time into a perpetual present. The contemporary is the now that never ends, the art that circles itself at the tail end of history looking back on defunct ideologies, archiving and polishing them for a future that never arrives…

The Places of History
Arseny Zhilyaev

To Make a World, Part I: Ultranationalism and the Art of the Stateless State
Jonas Staal

“A Monster Was Born”: Notes on the Rebirth of the “Corrupt Intellectual”
Hassan Khan

Democrisis: Notes on the Capitalist Imaginary of Europe
Sotirios Bahtsetzis

The Dead Afghani before the Camera and before Death
Bilal Khbeiz

Ágalma: The ‟Objet Petit a,” Alexander the Great, and Other Excesses of Skopje 2014
Suzana Milevska

On the False Democracy of Contemporary Art
Keti Chukhrov

Vigorous Flagging in the Heart of Europe: The Hungarian Homeland under the Right-Wing Regime
Edit András