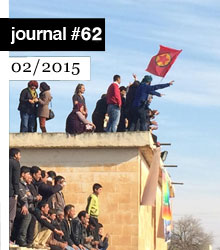 Increasingly it seems like no large exhibition opens without an artist boycott. And the reasons to withdraw are legitimate—a gulf museum employs migrant labor under terms approaching slavery, a biennial sponsor corporation operates an offshore detention center, works are censored for petty moral reasons, a municipality passes a homophobic law, or funding is traced to an occupying state with a staggering record of ongoing human rights abuses…

The Detweeting of Academia
Luis Camnitzer

Déjà Vu and the End of History
Paolo Virno

Media Archaeology Out of Nature: An Interview with Jussi Parikka
Paul Feigelfeld

Too Real an Unreality: Financial Markets as Occult
Philip Grant

The Communal Rift: The State Must be Defended
Jon Rich

The Common in the Time of Creative Reproductions: On Gerald Raunig’s Factories of Knowledge, Industries of Creativity
Ewa Majewska