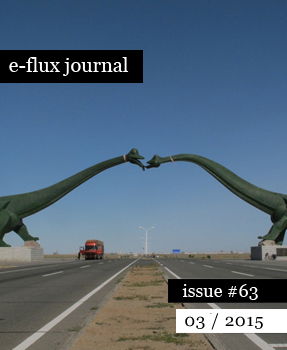 But it’s getting cold out there. Something in this setup is shifting below our feet. Something is making the image of the people fuzzy, increasingly vague—a floating signifier missing its referent. Now militants who might have once fought for an idea are increasingly self-interested. Artworks are starting to function more like investment vehicles that no longer need to be seen by people. And some say that our most recent stage of planetary evolution—our current geological epoch—is distinguished mainly by the permanently destructive effects of human industry on the biosphere, in species extinction, deforestation, pollution, radiation, and so on. Which is to say that humanity can no longer be taken as the solution to anything. On the contrary, and from the perspective of the earth, humanity looks increasingly like the problem.

So how can the humanistic tradition of art continue when humans are turning the biosphere into a place uninhabitable by humans themselves? An artist today may now suddenly find the only addressee to be a future of despair, of catastrophic human extinction, of death. What does art look like when it is made without any future to look forward to?

We may be able to look at this another way. Because even though this apocalyptic view of the world sees the end of humanity, it also sees humans as the super-authors of their own doom, and even as authors of the collapse of the planet’s ecosystem. Humans may be eradicated soon, but at the same time this scenario understands humanity as more supremely powerful than at any time since the Enlightenment, even though this power is purely negative.

So the artist working under these conditions may discover a certain pleasure in the violent spectacle of annihilation. In the sheer scale of its consequences, she may understand the megalomaniac thrill of having a stake in the architecture of planetary despair. Incapable of modesty, the artist in this situation might only find the means to abandon a bloated humanist positivism for a turbocharged death drive. But we should be careful not to get too excited here. Because in this situation we are not really witnessing the death of humanism so much as the thrill of seeing what it might do in reverse. Which might be a muffled cry for the promises of a classical humanism.

One can imagine a full shift of attention towards survival technologies. An artist must find ways to harness nuclear energy, to build better bunkers, to financialize everything possible by hoarding abstract capital that can only be spent on symbolic capital. Do we know what this art looks like? It might in fact look like nothing at all—hidden away inside a bunker, or appearing as a mirror that shows you your own image, but turned up a notch. Purged of positivist fantasies, it might only appear as money does: as an uncannily base dumb material like a stone or iron ore, but one that comes with a ghostly promise of eventually being exchanged for something better that may never come to pass.