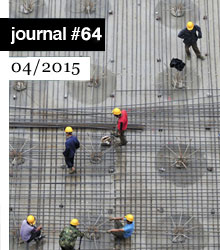 Architecture remains the most tangible way of constructing the social. Yet, the system we call “architecture” is not reducible to the physical, the tactile, the obvious. In the history of avant-garde architecture, immateriality and intangibility carried a promise of liberation, of escape from the heaviness of building, from completion, from gravity or reality. A new contemporary architecture would be built out of pure knowledge—drafted on paper as an idea to be shared, never bogged down by the technicalities of constructing in dimensional space, or even any spatial paradigm altogether. The history of the avant-garde can’t—as Beatriz Colomina has pointed out—be separated from its engagement with media and communication. Building would move at the speed of thought and spirit, superseding calculation, regulation, codes, and existing infrastructure…

Violence at the Threshold of Detectability
Eyal Weizman

Out of Bologna: Lacaton and Vassal’s Nantes School of Architecture
Philip Ursprung