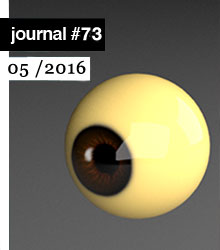 All things have borders that make them what they are. Some borders are spatial, like the edge of a painting, and some are chronological, like the end of a play. In this issue, Vivian Ziherl and Maria Iñigo Clavo both attempt to translate modernity from a historical, chronological teleology into a spatial geography. Ziherl does this by drawing our attention to the persistence, within contemporary space, of that supposedly historical borderline, the frontier, while Clavo provides a taxonomy of the various prefixes, like post-, pre-, and anti-, that have been appended to the “modern” in order to conceal its violent distribution in space within a false sequence of time…

Toward an Ontology of Style
Giorgio Agamben

On the Frontier, Again
Vivian Ziherl

The Silence of the Lens
David Claerbout