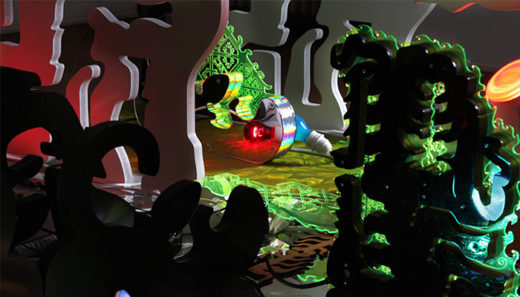 RHSM is a crystallization of MSHR’s live performance- an electronic ceremony that glides through four movements. Each movement acts as a virtual scape, defined by a distinct system for improvisation between the players and their handmade analog electronic instruments. MSHR’s pathway through the possibility matrix of each scape was mapped to an 8-track tape machine and digitized multiple times per track. These tracks were interwoven to create the iridescent effect of tape phasing as a compositional element, augmenting the psycho-acoustic content of the original improvisation.

This track was recorded live in an electronics array in our bedroom and performed using a symbiotic musical system co-played by Birch and Brenna. Birch played a synthesizer using two light sensors embedded in spiral-carved driftwood. Each sensor controlled cross- modulating oscillators, producing overtones in a a stepped harmonic series. Brenna vocoded the shape and further overtone into the synthesizer’s pitch while controlling the stereo panning rate of vocoded voice with a light sensor embedded in an abalone shell.

The remainder of the album was recorded inside MSHR’s most recent immersive installation. The room was transformed into a macro-circuit spread across a mirrored floor. The circuit was comprised of 7 sculptural light sensors, an array of colored light bulbs, 2 synths, 2 color organs and 2 humans. The synthesizers were modulated entirely by light input via light sensors and the lights were modulated entirely by sound input via color organs. The resulting light- audio feedback system was played by guiding the sensors and bulbs through a variety of possible configurations. Their spatial relationships determined the character of the sonic patterning.

Two additional optically controlled oscillators were added to the system, one embedded in a conch shell and the other in an oyster shell. These oscillators were played using two high powered stroboscopes. The strobe rates were modulated to produce rhythmic undulating patterns of phased ocular clipping. In a live setting and at high rates, the linked light and audio strobing can unfold audiovisual hallucinations. During this section, deliberately placed tape phasing was used to create an recording specific, hallucinatory effect.

The final scape uses two sequencers, also with a light controlled variables. Brenna played a mirrored cube shaped sequencer with two hard panned VCOs tuned to different pitches. The master clock of the sequencer was controlled by a digitally fabricated Fern Face sensor. Birch played a sequencer who’s circuitry is point to point soldered onto a piece of driftwood. The driftwood sequencer has built in light sensors which optionally control the master clock and master oscillator pitch. A carved driftwood light sensor was used to modulate the rate of the sequencer’s stereo panning.