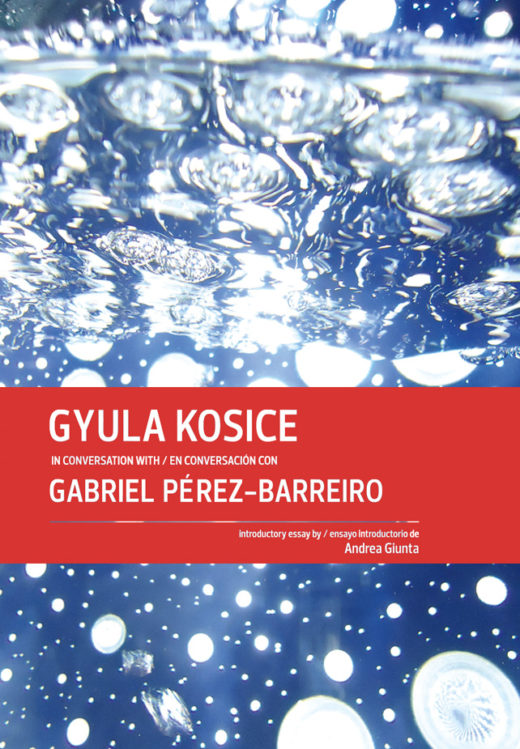 Gyula Kosice in conversation with/en conversación con Gabriel Pérez-Barreiro, the sixth title in the Conversaciones/Conversations series, presents a riveting exchange between Gyula Kosice, one of the key figures in the history of abstract art in Latin America, and Gabriel Pérez-Barreiro, the chief curator and director of the CPPC. This publication records conversations conducted over 20 years, which began shortly after Pérez-Barreiro first encountered Kosice’s work in a 1991 retrospective and includes an introduction by Andrea Giunta.

Gyula Kosice was born in 1924, in the town of Kosice in today’s Slovakia. When he was four years old, he immigrated to Argentina, where he lived and worked until his death. Sculptor, plastic artist, theoretician, and poet, Gyula Kosice was one of the most remarkable visionary artists of the 20th century. He co-founded the Madí movement in the 1940s, and he created the Hydrospatial City, a radical urban proposal that envisions a utopian environment suspended in space. Kosice is also recognized as one of the leading pioneers of Lumino Kinetic art.

The digital version of this title features talks between the artist and the author, videos including a walkthrough of the Hydrospatial City and Kosice’s kinetic works in action; archival recordings; full-text reproductions of Madí publications, et al.