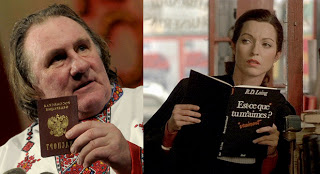 It was late.
Wind howled through the dark outside the windows of the Novotel Krakow Centrum. The four men had been locked for nine days in the hotel’s Pope John Paul II Honeymoon Suite, surviving on a diet of lager and garage-bought sandwiches, delivered to them every hour by a silent seven-foot-tall thug known only as Tadeusz. The absurdist theatre sessions the men had been subjected to by their captors had become steadily less frequent. The men had proved resilient, but – exhausted by nonsensical language games, atonal tuba music and dizzying non-linear narratives –  hope was beginning to ebb. Mellors was tending a head wound Cooke had sustained during one of the more brutal theatre sessions, when a surrealist mime act had unexpectedly exploded in his face. Chateigné Tytelman was by the window, gazing despondently at the blizzard enveloping the city beyond the walls of their gilded cage. Normand, slumped across an antique chaise-longue, stared at the pile of empty Zywiec cans in the centre of the room, each one a stinging reminder of how long they’d been prisoners of their mysterious kidnappers.
Unsure whether they would ever see their homes again, conversation naturally turned to pop music. Chateigné Tytelman and Normand wistfully exchanged names of leading French rock musicians. Guy Skornik. Popera Cosmic. Magma. “Remember Pierre Henry & Michel Colombier’s Teen Tonic?” asked Chateigné Tytelman. “Of course.” responded Normand. “And what I’d give to hear LSD!  by Jean-Christophe Averty again…” Mellors tried to join the conversation. “I like Serge Gainsbourg a lot.” The two Frenchmen fell silent. Realising that this was no time for musical one-upmanship, they humoured him, but Mellors could tell he was in over his head.
“Look chaps, if we ever happen to get out of this place, would you do me a favour?”
“Of course. Anything, my friend.” replied Normand.
Mellors continued. “You see, the thing is … well … I feel somewhat struck by what I can only describe as … an abject, almost Bataillan, feeling of non-knowledge about all this French pop you’re discussing. It’s embarrassing, I know. I was only ever taught The Beatles at school, although I picked up a bit of Francoise Hardy along the way. Cooke here had a better education and knows a little Jean-Michel Jarre, but really, we need your help. We feel like such fools being able only to name MC Solaar as the one French rapper we know. But I have an idea. Back home, Me, Cooke, and another pal of ours by the name of Fox – god knows where he is, though last I heard he was on some top secret mission in the US – run this little record label thing. Nothing flashy you understand, but we like to call it Junior Aspirin Records. If – no, when, dammit, when – you get back to Paris and Geneva, would you mind awfully putting together an expository podcast for JAR? Something the boys can use to better acquaint themselves with the riches of your pop music tradition? It would mean the world to us, it really would. And maybe, just maybe, it could help herald a new era. One in which children, in schools up and down the country, need never again have to listen to the Rolling Stones or The Kinks, but rather, grow to be men and women of the world, pioneers of a new musical entente cordiale… It’s a silly dream, I know, but … well, to blazes with being sensible. Let’s try and change the world. One 70s prog rock classic at a time.”
“We know someone.” said Chateigné Tytelman. “She goes by the name of Blanc. Her knowledge of the field is unsurpassed. We will enlist Blanc’s help. Together with my expertise, and Normand’s technical skills, we can do this for you Mellors. For you. For Cooke. For everyone.” Chateigné Tytelman and Normand stood. Cooke wiped a tear from his eyes. The Frenchmen nodded in silent assent, and the four prisoners shook hands.
Now, all that was between them and Serge Bulot’s Ballade pour Suzanne was that jailor thug Tadeusz. As they heard the brute’s heavy feet approach the door of their room, the men knew what they needed to do…