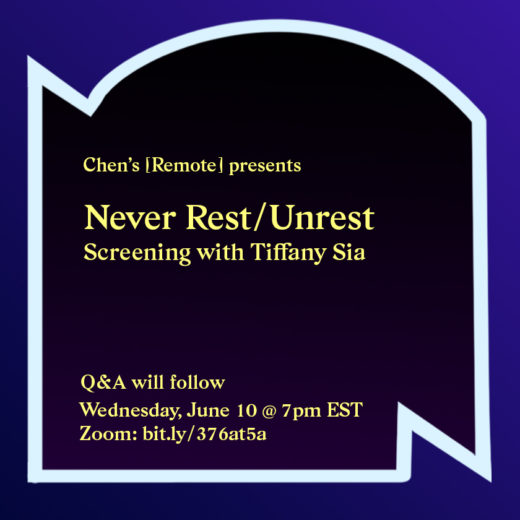 “Never Rest/Unrest” is a hand-held short film by Tiffany Sia about the relentless political actions in Hong Kong, spanning early summer to late 2019. The experimental short is an adaptation of the artist’s practice of scaling oral history, of showing political crisis in Hong Kong as ephemeral stories on Instagram for the past year. “Never Rest/Unrest” takes up the provocation of Julio Garcia Espinosa’s “Imperfect Cinema” on the potential for anti-colonial filmmaking, aiming towards an urgent, process-driven cinema while resisting dominant narratives of crisis pushed by news journalism. Instead, crisis poses ambiguous, anachronistic and often banal time.

Tiffany Sia
Tiffany Sia is an artist, independent film producer and founder of Speculative Place. Tiffany is the author of 咸濕 Salty Wet, a series of anti-travelogues on distance and desire within and without Hong Kong. The first volume was published as a chapbook in 2019 by Inpatient Press. 咸濕 Salty Wet is in Tai Kwun Contemporary’s Artists’ Book Library collection and Asia Art Archive as part of the collection of print materials made in response to the Anti-Extradition Bill protests. Tiffany is the Executive Producer of Adam Khalil and Bayley Sweitzer’s feature-length film Empty Metal (2018), as well as Adam Khalil and Zack Khalil’s forthcoming documentary feature, Ancestors in the Archives.