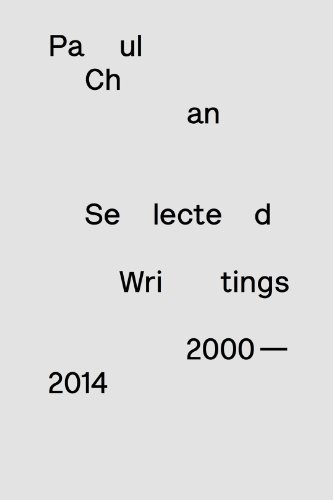 The work of Paul Chan (b. 1973) has charted a course in contemporary art as unpredictable and wide-ranging as the thinking that grounds his practice. “Paul Chan: Selected Writings 2000–2014” collects the critical essays and artists texts that first appeared in Artforum, October, Texte zur Kunst, and Frieze, among other publications, as well as never before published speeches and language-based works. From the comedy of artistic freedom in Duchamp to the contradictions that bind aesthetics and politics, Chan’s writings revel in the paradoxes that make the experience of art both vexing and pleasurable. He lays bare the ideas and personalities that motivate his work by reflecting on artists as diverse as Henry Darger, Chris Marker, Sigmar Polke, and Paul Sharits. He grapples with writers and thinkers who have played decisive roles in his practice, including Theodor W. Adorno, Samuel Beckett, and Marquis De Sade. Along the way, Chan forges an understanding of the role of art in a host of broader social and political arenas beyond galleries and museums, where the potential of art is tested and renewed. Edited by George Baker and Eric Banks with Isabel Friedli and Martina Venanzoni, with an introduction by Baker.