+KAOS. Ten Years of Hacking and Media Activism Theory on Demand
Maxigas, Ferry Byte, Sandrone Dazieri, et al.Autistici/Inventati, Laura Beritelli, Laura Beritelli, Trish Byrne, reginazabo, blicero, Miriam Rasch , Katja van Stiphout, [2 More...]
PublisherInstitute of Network Cultures2017
Format
Subject
Keyword
At the end of the 20th century, hacking was bleeding edge. When the ideas, practices and pranks of this experimental niche of technophiles attracted the attention of a handful of activists in Italy, they understood that information and communication were what would give shape and voice to social, political, and cultural processes in the near future. +KAOS is a cut and paste of interviews, like a documentary film transposed on paper. It describes the peculiar relationship between hacktivism and activism, in Italy and beyond, highlighting the importance of maintaining digital infrastructures. While this may not sound as glamorous as sneaking into ...

The Allure of the Selfie Network Notebooks
Brooke Wendt, Geert Lovink, Miriam Rasch, et al.Medamo, André Castro, Amsterdam University of Applied Sciences
PublisherInstitute of Network Cultures2014
Format
Subject
Keyword
Over 130 million images with the hashtag ‘selfie’ have been uploaded to the social media platform Instagram. In The Allure of the Selfie: Instagram and the New Self-Portrait, Brooke Wendt examines the significant hold that the ‘selfie’, or the digital self-portrait, has over self and society. Media theorist Vilém Flusser observed that society could become programmed to snap pictures for the sole benefit of cameras, as though under a ‘magical spell’, if photographs continued to be undecoded. Wendt examines this magical spell by analyzing users’ self-portraits on Instagram, one of the most popular contemporary platforms for image production. Marshall McLuhan’s reframing of ...

The Arab Archive: Mediated Memories and Digital Flows Theory on Demand
Donatella Della Ratta, Kay Dickinson, Sune Haugbolle, et al.Hadi Al Khatib, Mohammad Ali Atassi, Mitra Azar, Enrico De Angelis, Donatella Della Ratta, Kay Dickinson, Sune Haugbolle, Ulrike Lune Riboni, [3 More...]
PublisherInstitute of Network Cultures2020
Format
Subjects
Keywords
As the revolutions across the Arab world that came to a head in 2011 devolved into civil war and military coup, representation and history acquired a renewed and contested urgency. The capacities of the internet have enabled sharing and archiving in an unprecedented fashion. Yet, at the same time, these facilities institute a globally dispersed reinforcement and recalibration of power, turning memory and knowledge into commodified and copyrighted goods. In The Arab Archive: Mediated Memories and Digital Flows, activists, artists, filmmakers, producers, and scholars examine which images of struggle have been created, bought, sold, repurposed, denounced, and expunged. As a ...

Beyond ICT4D: New Media Research in Uganda Theory on Demand
Geert Lovink, Cindy Jeffers, Lily Antflick, et al.Morgan Currie, Katja van Stiphout , Margreet Riphagen, Print on Demand
PublisherInstitute of Network Cultures2011
Format
Subject
Keywords
Beyond ICT4D: New Media Research in Uganda is a collection of ethnographic reports from diverse perspectives of those living at the other end of the African ICT pyramid. Crucially, these texts refocus on the so-called “ICT4D” debate away from the standard western lens, which depicts users in the developing world as passive receivers of Western technological development, towards Ugandans whose use and production of technologies entail innovations from the ground up. It is this ‘other’ everyday point of view that is too often missing in the ICT4D debate: valuable voices that put technologies, projects and organizations into their proper context. Conducted ...

C’Lick Me: A Netporn Studies Reader INC Reader
Matteo Pasquinelli, Katrien Jacobs, Marije Janssen, et al.Sabine Niederer, Geert Lovink, Wietske Maas, Kernow Craig, Paradiso, Regina Lynn, Mark Dery, Nishant Shah, [20 More...]
PublisherInstitute of Network Cultures2005
Format
Subject
Keywords
C’Lick Me: A Netporn Studies Reader is an anthology that collects the best material from two years of debate from The Art and Politics of Netporn 2005 conference to the 2007 C’Lick Me festival. The C’Lick Me reader opens the field of ‘Internet pornology’. Based on non-conventional approaches and mixing academics, artists and activists, it reclaims a critical post-enthusiastic, post-censorship perspective on netporn, a dark field that has been dominated thus far by dodgy commerce and filtering. The C’Lick Me reader covers the rise of the netporn society from the Usenet underground to the blogosphere, analyses economic data and search engine ...

Communities at a Crossroads: Material Semiotics for Online Sociability in the Fade of Cyberculture Theory on Demand
Annalisa Pelizza, Katja van Stiphout, Kelly Mostert
PublisherInstitute of Network Cultures2018
Format
Subject
Keyword
How to conceptualize online sociability in the 21st century? To answer this question, Communities at a Crossroads looks back at the mid-2000s. With the burst of the creative-entrepreneur alliance, the territorialisation of the internet and the commercialization of interpersonal ties, that period constituted a turning point for digital communitarian cultures. Many of the techno-libertarian culture’s utopias underpinning the ideas for online sociability faced systematic counter evidence. This change in paradigm has still consequences today. Avoiding both empty invocations of community and swift conclusions of doom, Annalisa Pelizza investigates the theories of actions that have underpinned the development of techno-social digital assemblages ... 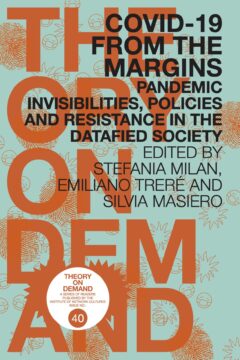 COVID-19 from the Margins: Pandemic Invisibilities, Policies and Resistance in the Datafied Society Theory on Demand
Stefania Milan, Emiliano Treré, Silvia Masiero, et al.Claudio Agosti, Thomas Aureliani, Anat Ben-David, Anna Berti Suman, Luiza Bialasiewicz, Nic Bidwell, Tiziano Bonini, Jelke Bosma, [67 More...]
PublisherInstitute of Network Cultures2021
Format
Subjects
Keywords
In the first pandemic of the datafied society, the disempowered were denied a voice in the heavily quantified mainstream narrative. Featuring stories of invisibility, injustice, hope and resistance, this book gives voice to communities at the margins in the Global South and beyond. The multilingual, polycentric and pluriversal narration invites the reader to enact and experience “Big Data from the South(s)” as a decolonial lens to read the pandemic.

Creative Networks, in the Rearview Mirror of Eastern European History Theory on Demand
Rasa Smite, Linda Vebere, Miriam Rasch, et al.Katja van Stiphout, Margreet Riphagen
Publisher Institute of Network Cultures2012
Format
Subjects
Keywords
Creative Networks explores the dawn of the Internet culture in the age of network society from the perspective of Eastern Europe. From a theoretical angle the networks are introduced and interpreted as complex socio-technical systems. The author analyzes the development of these networked self-organized formations starting off with ‘virtual communities’ of ‘creative networks’, which emerged during the early phase of the Internet, up to the phenomena of today’s online ‘social networks’. Along with the translocal case studies of Nettime, Syndicate, Faces and Xchange networks (as well as with the other important facets of the 1990s network culture in Europe), the ... 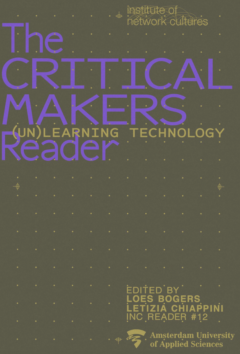 The Critical Makers Reader: (Un)learning Technology INC Reader
Loes Bogers, Letizia Chiappini, Kat Braybrooke, et al.Abigail Browning, xtine burrough, Serena Cangiano, David Cole, Critical Media Lab, Maria Dada, Sharon Ede, Lori Emerson, [26 More...]
PublisherInstitute of Network Cultures2019
Format
Subjects
Keywords
A decade ago many gushed at the possibilities of 3D printers and other DIY tech. Today makers are increasingly shaking off their initial blind enthusiasm to numerically control everything, rediscovering an interest in sociocultural histories and futures and waking up to the environmental and economic implications of digital machines that transform materials. An accumulation of critique has collectively registered that no tool, service, or software is good, bad, or neutral—or even free for that matter. We’ve arrived at a crossroads, where a reflective pause coincides with new critical initiatives emerging across disciplines. What was making? What is making? What could making ... 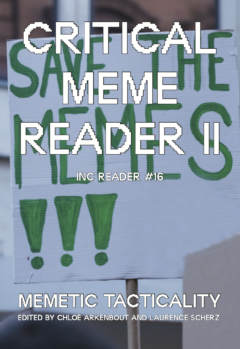 Critical Meme Reader II: Memetic Tacticality INC Reader
Chloë Arkenbout, Laurence Scherz, Pierre d’Alancaisez, et al.Chloë Arkenbout, Bhumika Bhattacharya, Marijn Bril, Savriël Dillingh, Tom Divon, Jasmine Erkan, Emma Damiani, Inte Gloerich, [18 More...]
PublisherInstitute of Network Cultures2021
Format
Subjects
Keywords
The (political) power of memes has moved beyond virtual images. The distinction between the virtual and ‘real life’ no longer applies, or perhaps was never really there. Their effects (or should we say affects?) are moving through digital infrastructures, policy, regulations and bodies. If memes are used as a tool by the alt-right to mobilize people to storm the Capitol and play a substantial role in the Ukrainian war, can they also be used by the left to spark a revolution, as memetic warfare is more immediate and accessible than real-life demonstrations? What kind of labor would that require? What ...
1 2 3 … 8 Next