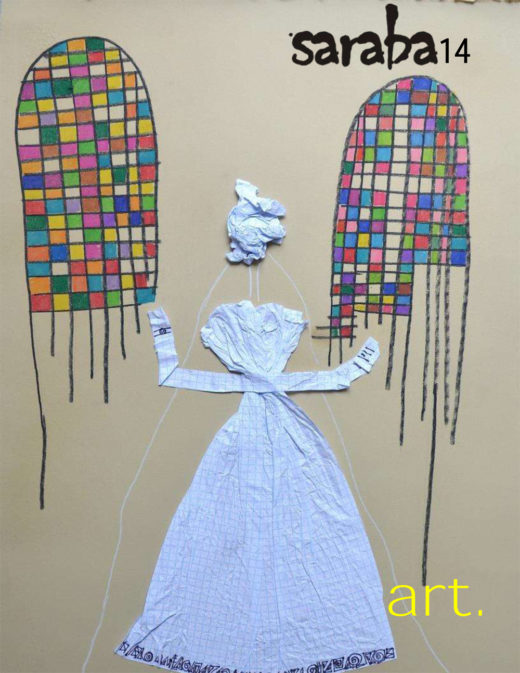 WE THINK that to deal with art we ought to present it, not talk about it. For four months we opened our window to artists producing the finest work in Nigeria, Africa and elsewhere, and the result is what you will see. Seeing is ultimately a trafficking in subtlety, especially if that process of seeing is influenced by art.

What, exactly, is art? Since at Saraba we‘re open to this kind of questioning that is essentially a voyage, the kind that assembles literary content, art is a process as well as an outcome. Art is the reverberation of colour; art is approaching an image with ambivalence; art is looking at a story or a poem and feeling within oneself for emotions and experiences; art is the experience with yourself.

We understand the power of the image in a world over-zealous about representing itself. Our contributors helped us create a landscape of metamorphosizing colour, themes, and outlook. Our landscape stretched from Victor Ehikhamenor‘s unsentimental rendering of face, to Neo Ntsoma‘s warmth-filled glance at Soweto‘s fashion. Then Olalekan Jeyifo‘s drawings feels prescient, ideational, the existent sci-fi. Paul Sika is our master that uncovers the drama that is performed in everyday spaces, by everyday people. Serge Jay deals with liquor as a guilty alcoholic would, giving it a recognizable face, and in that attempt, calling its bluff. And then with 3bute, Bunmi Oloruntoba moves to claim a new territory for storytelling, for narratives that blur the distinction between the digital now, the analogous past and the speculative future.

Beside these images are words. We granted our contributors the freedom to roam the human mind. Our fictional oeuvre, we must say, is audacious. Complex narratives are woven around seemingly quotidian tendencies. Sex and illness meets credit crunch in Olisakwe‘s Spiritual Attack. Affection is found in a tumultuous wrestle against physical handicap in the long excerpt from Yomi Ogunsanya‘s forthcoming novel. Mazi Nwonwu‘s speculative fiction imagines a deadly virus which renders its victims terminal. Every story is a refreshing reproduction of realities in modern Africa.

We will like you to read this issue with the idea that you‘re on a pleasure ride, seeing and feeling. Because what art isn‘t, and what it shouldn‘t be, is a burden around one‘s neck.