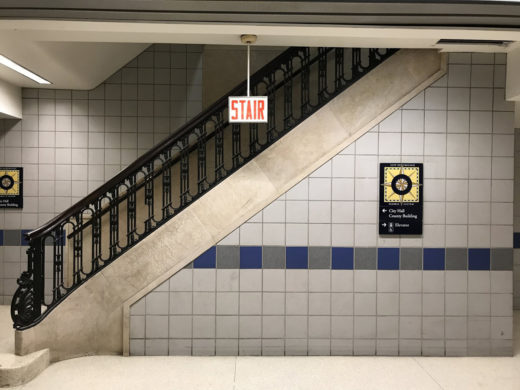 This episode of Site Visit was recorded live in the Chicago Cultural Center, which is currently playing host to the 2017 Architecture Biennial titled Make New History. On today’s Site Visit, Ashley, Erik and Kelly visit the Chicago Pedway, a complex network of underground tunnels, bridges and concourses, connecting an assortment of skyscrapers, transportation hubs, and department stores in the central business district of Chicago. Development of the Pedway began in 1951 and today it links more than 40 blocks and 50 buildings. As we discovered, there are many dead ends, construction zones, and closed corridors in the Pedway. However, we managed to find joy in the many twists and turns — getting a little lost — and especially in the conversation about Kelly’s current practice which often focused on lines, thresholds and endless interiors.

Kelly Bair is principal of Central Standard Office of Design and Partner at BairBalliet. Her work has been exhibited nationally and internationally including in the inaugural Chicago Architecture Biennial (2015) and the 15th International Architecture Exhibition in the U.S. Pavilion at the Venice Biennale (2016). Her writing on architecture has been published in Project, Log, and Room One Thousand among others. Bair is an Assistant Professor of Architecture at University of Illinois at Chicago. She is also co-founder of Possible Mediums, a collaborative of four architects and educators interested in shaking up the context and format in which architecture is taught, produced, and engaged.