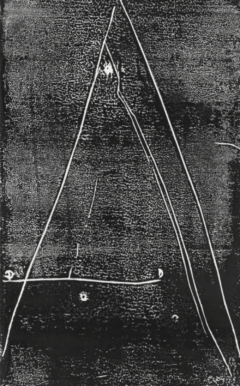 2218,5 cm / 873.42 in. onestar press
Alexander May
Publisheronestar press2014
Format
Subjects
Keyword
Based on 150 characters contained within a single phrase, Alexander May has transcribed each character onto linoleum engravings to create a set of unique prints for each letter and stretching this text across the bound parameters of a onestar press book. By the artist’s hand, this investigation focuses upon the economy of the printed page—the space and value of content—expanding past the limitations of a single phrase upon the page. 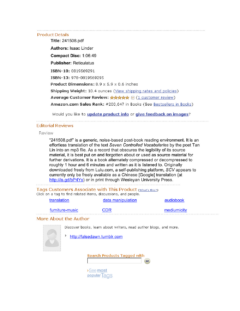 241508.pdf Gauss PDF
Isaac Linder
PublisherGauss PDF2011
Formats
Subjects
Keywords
“241508.pdf” is a generic, noise-based post-book reading environment. It is an effortless translation of the text Seven Controlled Vocabularies by the poet Tan Lin into an mp3 file. As a record that obscures the legibility of its source material, it is best put on and forgotten about or used as source material for further derivations. It is a book alternately compressed or decompressed to roughly 1 hour and 6 minutes and written as it is listened to. Originally downloaded freely from Lulu.com, a self-publishing platform, SCV appears to currently only be freely available as a Chinese [Google] translation (at http://is.gd/bP4Ys) ... 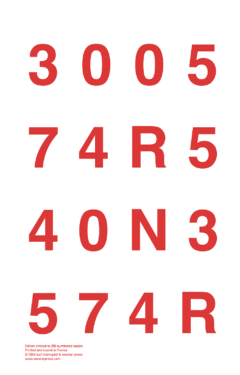 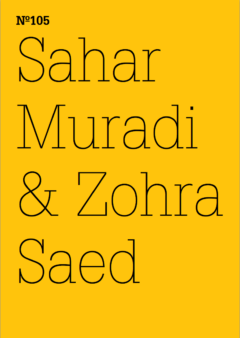 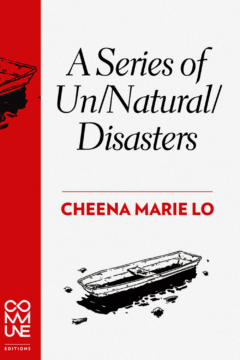 A Series of Un/Natural/Disasters Commune Editions
Cheena Marie Lo, Front Group Design, Amze Emmons
PublishersCommune EditionsAK Press2016
Format
Subject
Keywords
A Series of Un/Natural/Disasters is attentive to the sorts of mutual aid and possibility that appear in moments of state failure. As such it maps long and complicated equations, moving from Katrina to the prisoners at Riker’s Island as they await Sandy. It understands disaster as a collective system, the state as precarious, and community as necessary. 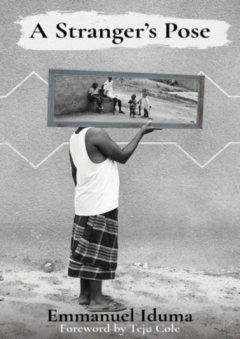 A Stranger's Pose
Emmanuel Iduma, Teju Cole, Dawit L. Petros, et al.Bibi Bakare-Yusuf, Layla Mohamed, Maia Faddoul, Allan Milton Castillo Rivas
PublisherCassava Republic2018
Format
Subjects
Keywords
A unique blend of travelogue, photographs and poetry, A Stranger’s Pose draws the reader into a world of encounters haunted by the absence of home, estrangement from a lover and family tragedies. The author’s recollections and reflections of fragments of his journeys to African cities, from Dakar to Douala, Bamako to Benin, and Khartoum to Casablanca, offer a compelling and very personal meditation on the meaning of home and the generosity of strangers to a lone traveler. Inspired by the author’s own travels with photographers between 2011 and 2015, the Iduma’s own accounts are expanded to include other narratives about ...

The Act of Reading
Nathan Jones, Sam Skinner, Mark Simmonds, et al.Anna Barham, Charles Bernstein, Tim Etchells, Stephen Fortune, Grace Harrison, Mark Greenwood, N. Katherine Hayles, Liam Jones, [11 More...]
PublisherTorque Editions2015
Format
Subjects
Keywords
“Reading inquisitively over each others’ shoulders, the poems, meditations, analyses and experiments in this volume respond with audacity and adventure to the challenge of characterizing what reading, this most familiar yet renewedly strange occupation, has been and may yet become.”

Africa Saraba
Esame Bassey, Sefi Atta, Okwuje Israel Chukwuemeka, et al.Brian Bwesigye, Lara Daniels, Sylva Nze Ifedigbo, Tosin Akingbulu, Richard Ali, Keguro Macharia, Pius Adesanmi, Kenneth W. Harrow, [17 More...]
PublisherSaraba2012
Format
Subject
Keywords
There is a statement, “Africa is a country,” used to satirize Western‘ preconceptions about Africa. With billions of people, thousands of ethnicities, several colonial histories and varied post-independence struggles, the continent is spoken of as a single plane that is beset by bad leadership, unending poverty, and the odd scenery. Yes, the continent has these, and yes, there really are some similarities across the different countries and cultures. But, the question remains: Is that all that can be said? And there is another question: How can you represent what truly is Africa? For us at Saraba, we set out to have ... 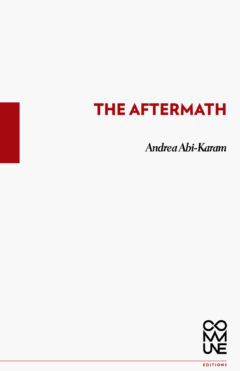 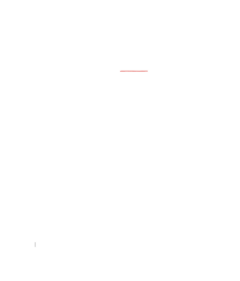 Air the Trees Gauss PDF
Joey Yearous-Algozin, Larry Eigner
PublisherGauss PDF2013
Format
Subjects
Keyword
Air the Trees by Larry Eigner the disappearance of matter where is the end of the poem tired eyes the sun travels ... 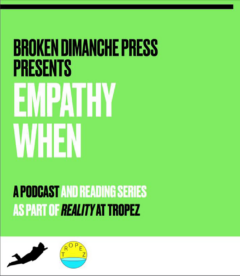 Alan Murrin Empathy When
John Holten, Jemowit Nowak, Alan Murrin, et al.Jemowit Nowak, Nora Nele Heinerfetter, Inkk Agop
PublishersBroken Dimanche PressTropez2020
Format
Subjects
Keywords
This Saturday for the next installment in our series Empathy When we’ll be joined on the terrace by Alan Murrin! Alan Murrin is an Irish fiction writer based in Berlin. His fiction has been anthologised in Literally Speaking Berlin 2019, and The Sacred Exists to be Found and he has been short-listed for the Irish Arts and Writers Festival short story prize.

Alejandro Jodorowsky dOCUMENTA (13): 100 Notes, 100 Thoughts
Alejandro Jodorowsky, Chus Martínez, Carolyn Christov-Bakargiev, et al.Chus Martínez, Bettina Funcke, Katrin Sauerländer, Cordelia Marten, Sam Frank, Melissa Larner, Leftloft
PublisherHatje Cantz2012
Format
Subjects
Keywords
Dune was to be his most ambitious film production: a personal adaptation of Frank Herbert’s novel of the same title, published in 1965. The science-fiction saga was ideally suited to the choreography of transgressive visual and narrative genres of the sort in which the method of Alejandro Jodorowsky (b. 1929 in Chile) partakes, and as it had been manifested in his films El Topo (1970) and The Holy Mountain (1973). Such an important project merited its own blank book. Hence, the word “DUNE” written in Art Deco-style typography is on the cover of a thick yellow notebook from 1974. Inside, however, ...
1 2 3 … 27 Next