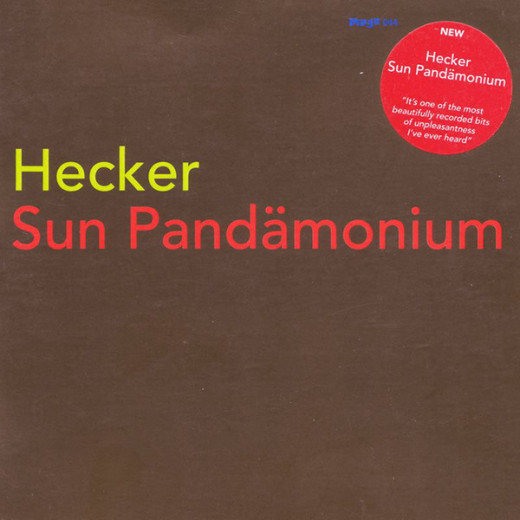 Deluxe vinyl issue of one of the most important albums of modern music and quite simply some of the finest computer audio excursions unleashed in recent years. Sun Pandämonium is the third full- length album from Florian Hecker, originally released in CD format on Mego in 2003. Sun Pandämonium also received the Award of Distinction Digital Music at the Prix Ars Electronica – the “International Competition for CyberArts” – the same year.

Striking the listener from many angles with a diverse range of fiercely dynamic electronic scenarios, Hecker utilizes the computer to materialize new compositional strategies, leaving behind standard musical structures and seeking out unusual timbral and textural effects. As one reviewer stated, “This record is electronic music as psilocybin science.” Or, as the American online journal Pitchforkmedia states: “Loud and overwhelming at any volume setting,” Sun Pandämonium contains “the sounds and frequencies not only of diamonds being sharpened, but then being used to etch directly on the lenses of your optical readers. Call him a sick fuck, a genius, or even Mister Antichrist, but this will cleanse the audio palate as it blows your teeth out.”

The LP is mastered and cut by Rashad Becker at D&M, in a limited edition of 800 copies, pressed on 140g vinyl and comes in a poly- lined inner sleeve. It is packaged with six monochrome lacquered sheets which are housed in a silk screened PVC sleeve with the original artwork by Tina Frank & Florian Hecker.