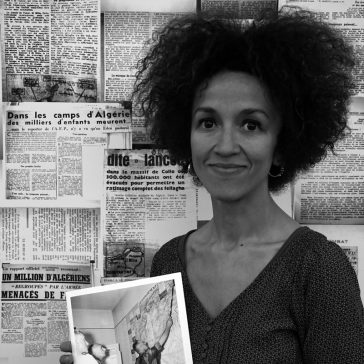 The French Counter-Revolutionary Architecture in 1950s Algeria The Funambulist Podcast

The French Counter-Revolutionary Architecture in 1950s Algeria (The Funambulist site)

Samia Henni and I recorded this conversation after a visit of her exhibition, Discreet Violence: Architecture and the French War in Algeria at ETH University in Zurich. In it, we attempt to introduce the historical context of the Algerian Revolution between 1945 and 1962, as well as the French architecture of counter-revolution designed against it, in particular the so-called “regrouping” camps in which the population of entire villages of rural Algeria were forcefully relocated by the colonial army. We also discuss of the challenges of curating such an exhibition when most of the available documents come from the colonizer side, as well as of what the specificity of the Algerian Revolution can teach us at a more global level for the various decolonial movements.

Samia Henni was born in Algiers, Algeria. She teaches at the Institute for the History and Theory of Architecture, Department of Architecture, ETH Zurich; and at the Research-based Master Program CCC, HEAD, Geneva University of Art and Design. She holds a PhD (with distinction, ETH Medal) in the History and Theory of Art and Architecture from the ETH Zurich. She graduated from the Academy of Architecture, Università della Svizzera Italiana, Mendrisio, Switzerland. She has also studied at the Goldsmiths, University of London, United Kingdom; the Ecole Polytechnique d’Architecture et d’Urbanisme, Algiers, Algeria, and the EX-Berlage Institute, Rotterdam, the Netherlands. Her main research interests lie at the intersection of territory and colonialism, violence, conflict, warfare, and forced resettlements.