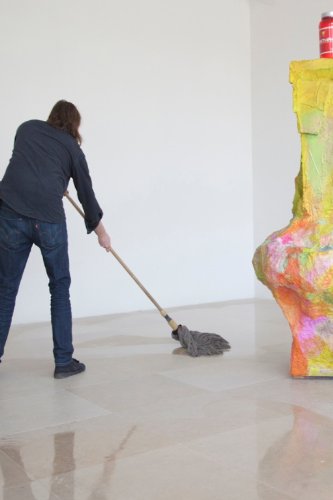 The Help, A Companion Guide

“The Help, A Companion Guide” by artist Rachel Harrison is based on images surrounding Harrison’s 2012 solo show at Greene Naftali Gallery entitled “The Help.” The exhibition shares its title with her photograph of the back door maintenance entrance to Duchamp’s “Étant donnés,” which is visible in the exhibition galleries of the Philadelphia Museum of Art, and alludes to the entangled roles of the Artist, the Muse, and the Help. “The Help, A Companion Guide” showcases visual and conceptual elements that Harrison used in the making of “The Help”: from early Google image searches and reference materials, to documentation of the installation process and its attendant “help,” to selected details of the final sculptural works. Harrison creates visual and temporal rhymes that playfully link her finished sculptural works to a constellation of materials and services that express the immanent sociality at stake in every work of art. This is Harrison’s first e-book.