As an accompaniment to some of the shows we put forth a publication with content related to the work of the artists. Due to the research-based practice of most of the artists, there is a lot of interesting material that can not be read directly in the work itself but is worth publishing. The articles are written by writers and scholars who are specialists in the artists' fields of research. The design is by Lesley Moore.

# 1 Tia Ciata's Open House (as an accompaniment with Wendelien van Oldenborgh's show Après la Reprise La Prise, September 2009)
# 2 On the Art of Making Without Hands (with the show Not Created by a Human Hand, December 2009)
# 3 Zakłady na Życie (Plant-Life) (with James Beckett's soloshow with the same title, April 2010)
# 4 Science of the Strange (along with Ulrik Heltoft's show, September 2010)
# 5 Scolpire il Tempo (as an accompaniment to the solo show of Giorgio Andreotta Calò, November 2010)
# 6 On Discipline (with Josef Dabernig's show, April 2011)
# 7 The Prison of Santo Stefano (along with Rossella Biscotti's solo presentation at Frieze Art Fair 2011)
# 8 Trillochromes (with Michael Portnoy's show, November 2013)
# 9 The Revenants (with Moyra Davey's show, April 2015) 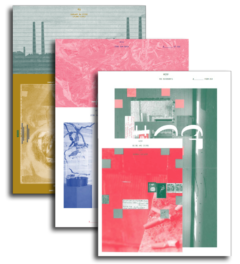