Equal Equal #2 Equal Equal (==)
Matt Keegan, Su Barber, Sam Anderson, et al.Daniel Bozhkov, Sam Anderson, Uri Aran, Rachel Foullon, Diane Simpson, Vincent Fecteau, Jo Nigoghossian, Jessica Stockholder, [26 More...]
PublisherCapricious2015
Formats
Subject
Keyword
Although it looks like it, == is not the catalogue of an exhibition. It is exactly the opposite, it is an independent project, conceived ahead of an exhibition. In fact, Matt Keegan has devised an exhibition from the publication, rather than the traditional reverse. Even more, an unlimited number of venues may be produced. Emphasizing the wall as a page, each one provides a temporary container for ==’s various parts, allowing Matt Keegan to act as the protagonist for the fictive curatorial project.

Equal Equal #3 Equal Equal (==)
Matt Keegan, Sam Anderson, Judith Barry, et al.Diane Simpson, Jacob Robichaux, Steve Reinke, Sreshta Rit Premnath, Kay Rosen, Ed Atkins, Daniel Bozhkov, Sam Anderson, [40 More...]
PublisherEqual Equal2015
Formats
Subject
Keyword
A publication is a time capsule & transmitter from here to there, from you to me. Working from this basic statement: how has your work changed since your 2012 or 2015 contribution to ==? This question and timeline could be rephrased as: How has your life & work changed in the wake of Brexit, Trump’s presidency, and the move to the right in Europe. (The majority of contributors are based in the US and this prompt is not intended to romanticize Obama’s presidency or deny repressive administrations that have come before). It is not necessary to root your response in the 1st person, ... 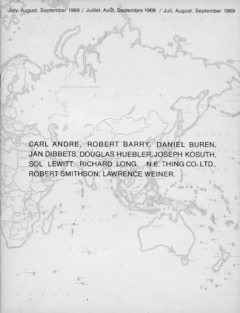 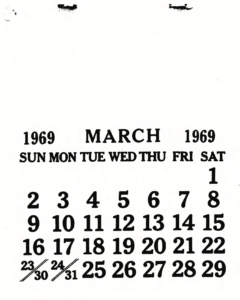 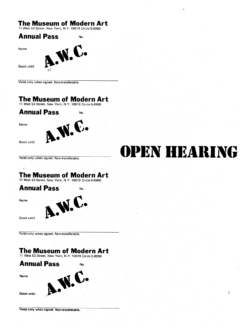 Open Hearing Primary Information
Art Workers Coalition, Carl Andre, Architects’ Resistance, et al.Robert Barry, Gregory Battcock, Jon Bauch, Ernst Benkert, Don Bernshouse, Gloria Greenberg Bressler, Selma Brody, Bruce Brown, [59 More...]
PublishersPrimary InformationArt Workers Coalition2008
Formats
Subjects
Keywords
Open Hearing is a monumental collection of statements originally published in the wake of the first public meeting of the Art Workers’ Coalition (AWC), at the School of Visual Arts in New York on April 10, 1969. The meeting was billed as “an open public hearing […] regarding museum reform” and the establishment of a program for the AWC, in which any and all art workers were invited to “testify.” It was a consummation of the group’s inception that January, in which the urgency of its foundational concerns and its potency as a rallying point for diverse critical voices were ... 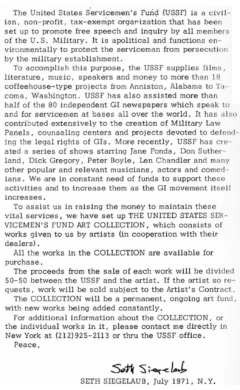 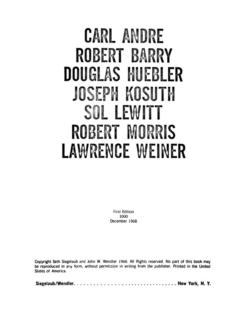