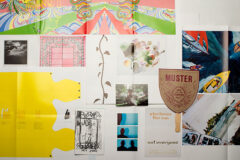 NDP #1 North Drive Press
Matt Keegan, Lizzy Lee, Cory Arcangel, et al.Ricardo Miranda Zúñiga, Fia Backström, Bettina Funcke, Sue de Beer, Ian Cooper, Tom Devaney, Jim Drain, Your Face, [21 More...]
PublisherNorth Drive Press2004
Formats
Subjects
The impetus for creating NDP was to produce a mobile group exhibition. NDP #1: Summerkit was released in the summer of 2004 and was distributed in a brown vinyl sleeve. It contained large double-sided posters featuring reproductions of works from emerging artists. Each side of the posters functioned as self-contained shows; dotted lines around each of the reproductions invited readers to cut out and rearrange the images as they wished. In addition to the posters, a handful of loose art multiples were included. A series of artist-to-artist interviews and a transcript of a panel discussion rounded out this first issue.