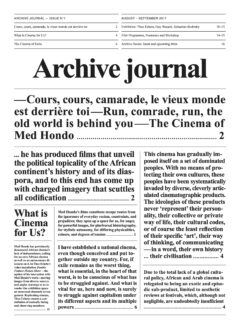 Archive Journal Issue 01
Med Hondo, Paolo Caffoni, Chiara Figone, et al.Annika Turkowski, Enoka Ayemba, Marie-Hélène Gutberlet, Brigitta Kuster, Marie-Hélène Gutberlet, Med Hondo, Brigitta Kuster, John Barrett, [3 More...]
PublisherArchive Books2017
Format
Subjects
Keywords
“Run comrade, the old world is behind you,” is one of the slogans hoisted by the French 1968 movement, which eventually found its way into Soleil Ô (1969), Med Hondo’s best-known film. Filmmaker, actor, and voice-actor, Med Hondo was born in Mauritania, subsequently emigrated to France where he has been living in the Parisian suburbs for more than fifty years. A truly self-made man, Med Hondo began to work in theatre, uncompromisingly making his way toward filmmaking. As a director, he has produced films that unveil the political topicality of the African continent’s history and of its diaspora, and to ... 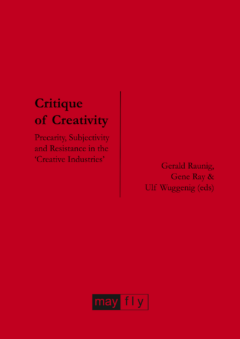 Critique of Creativity: Precarity, Subjectivity and Resistance in the ‘Creative Industries’ MayFly Books
Gerald Raunig, Gene Ray, Ulf Wuggenig, et al.Stefan Nowotny, Suely Rolnik, Maurizio Lazzarato, Ulf Wuggenig, Isabell Lorey, Brigitta Kuster, Paolo Virno, Monika Mokre, [8 More...]
PublisherMayFly Books2011
Format
Subjects
Keywords
Creativity is astir: reborn, re-conjured, re-branded, resurgent. The old myths of creation and creators – the hallowed labors and privileged agencies of demiurges and prime movers, of Biblical world-makers and self-fashioning artist-geniuses – are back underway, producing effects, circulating appeals. Much as the Catholic Church dresses the old creationism in the new gowns of ‘intelligent design’, the Creative Industries sound the clarion call to the Cultural Entrepreneurs. In the hype of the ‘creative class’ and the high flights of the digital bohemians, the renaissance of ‘the creatives’ is visibly enacted. The essays collected in this book analyze this complex resurgence ...

Inflight Magazine #1 Women on Aeroplanes
Annett Busch, Marie-Hélène Gutberlet, very, Frankfurt am Main, et al.Brigitta Kuster, Jihan El-Tahri, Marie-Hélène Gutberlet, Annett Busch, Kodwo Eshun, Maryam Kazeem, Lisl Ponger, Emma Wolukau-Wanambwa, [10 More...]
PublisherWomen on Aeroplanes2017
Format
Subjects
Keywords
The multi-layered research and exhibition project Women on Aeroplanes seeks to change the parameters of how we see and listen to the achievements and practices of women in a multitude of moments, being part of a transatlantic and transnational history, with a focus on the struggles for independence and their after effects. The transition from mobilizing all possible forces to win a battle and its hangover, the disenchantment of not being part of any negotiation concerning the future, seems to crystalise a history lesson about power politics. The disappearance of women in politics after their strong visibility during the times ...

Private Investigations: Paths of Critical Knowledge Production in Contemporary Art
Andrei Siclodi, Alfredo Cramerotti, Judith Fischer, et al.Geoffrey Garrison, Laura Horelli, Alison Gerber, Ana Hoffner, Brigitta Kuster, Ralo Mayer, Andrei Siclodi, Alexander Vaindorf, [2 More...]
PublisherBuchs'n'Books2011
Format
Subject
Keywords
This book, to a certain extent, aims to open up a field of discussion about whether or not art in the twenty-first century can be relevant for society outside the art world, and if so, how and where. We are now only at the beginning of this endeavor, but the direction, in my opinion, is already set: it is clear that criticality, resistance to economic instrumentalization, and a productive maintenance of autonomy as well as versatility will play a crucial role as parameters for artistic practices. Yet not only artists and cultural producers who act according to these criteria are ...