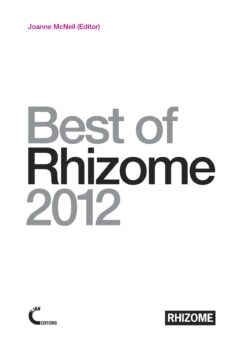 Best of Rhizome 2012 Link Editions
Joanne McNeil, Joanne McNeil, Heather Corcoran, et al.Orit Gat, The Piracy Project, Rahel Aima, Angela Genusa, Adam Rothstein, John Powers, Sarah Jaffe, Harry Burke, [12 More...]
PublisherLink Editions2013
Format
Subjects
Keyword
Best of Rhizome 2012 is a selection of texts published on the editorial platform of Rhizome along 2012. Edited by Joanne McNeil, the book is, in the words of Rhizome’s Executive Director Heather Corcoran, “not just a best of Rhizome’s work, but a portrait of the year that we hope will gain significance over time for its contextualization and articulation of artists’ practices. Artists are predictors and barometers of change, and sensitive to their cultural surroundings. From texts on production in the digital age, to the influence of the Occupy Movement, from drones and surveillance, to online vernacular – these ... 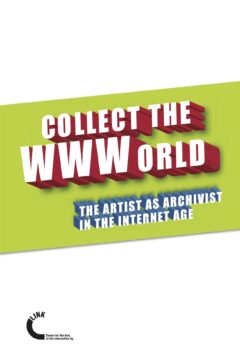 Collect the WWWorld: The Artist as Archivist in the Internet Age Link Editions
Domenico Quaranta, Domenico Quaranta, Josephine Bosma, et al.Joanne McNeil, Gene McHugh, Alterazioni Video, Kari Altmann, Cory Arcangel, Gazira Babeli, Kevin Bewersdorf, Luca Bolognesi, [23 More...]
PublisherLink Editions2011
Format
Subjects
Keywords
The last decade has seen an incredible growth in the production and distribution of images and other cultural artefacts. The internet is the place where all these cultural products are stored, classified, voted, collected and trashed. What is the impact of this process on art making and on the artist? Which kind of dialogue is going on between amateur practices and codified languages? How does art respond to the society of information? This is a book about endless archives, image collections, bees plundering from flower to flower and hunters crawling through the online wilderness.

Interstitial EP032: Lurking by Joanne McNeil Interstitial
David Huber, Sam Clapp, Joanne McNeil
PublisherThinkbelt2020
Format
Subject
Keywords
What would an ideal internet experience be like? Joanne McNeil explores the 30-year history of online life—the communities and identities and hazards—and imagines how we, the users, might recover some of the potential of our technologies.