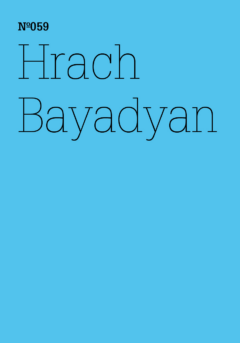 Becoming Post-Soviet dOCUMENTA (13): 100 Notes, 100 Thoughts
Hrach Bayadyan, Carolyn Christov-Bakargiev, Chus Martínez, et al.Bettina Funcke, Katrin Sauerländer, Cordelia Marten, Melissa Larner, Alexander Müller, Stefanie Drobnik, Sam Frank, Narek Bayadyan, [2 More...]
PublisherHatje Cantz2012
Format
Subjects
Keywords
It has often been noted that the collapse of the socialist system did not result in research activities that could be compared to postcolonial studies. As Ewa Thompson has observed, “Unlike Western colonies, which have increasingly talked back to their former masters, Russia’s colonies have by and large remained mute.” Instead, at the beginning of the twenty-first century, opinions have been expressed from within different research fields regarding the appropriateness of thinking of post-Soviet societies in terms of postcolonial studies. Nevertheless, asserting that postsocialism continues to remain a useful category for researchers, Caroline Humphrey notes the existence of a growing ... 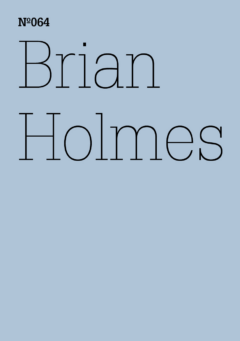 Profanity and the Financial Markets: A User’s Guide to Closing the Casino dOCUMENTA (13): 100 Notes, 100 Thoughts
Brian Holmes, Carolyn Christov-Bakargiev, Chus Martínez, et al.Bettina Funcke, Katrin Sauerländer, Cordelia Marten, Frauke Schnoor, Melissa Larner, Alexander Müller, Stefanie Drobnik, Sam Frank, [1 More...]
PublisherHatje Cantz2012
Format
Subjects
Keywords
I want to begin, not with a curse, but with a very beautiful convergence—one widely held to be real, but shrouded in mystery for millions of people. I am talking about the “movement of the squares” unfolding on both sides of the North/South divide. What is the hidden link be – tween the middle-class and precarious movements against the dictates of finance capital—Occupy Wall Street and the European Indignados— and the far more perilous struggles to end dictatorships in North Africa and the Middle East? What relationship could possibly be sustained be – tween the regions that concentrate global wealth ...