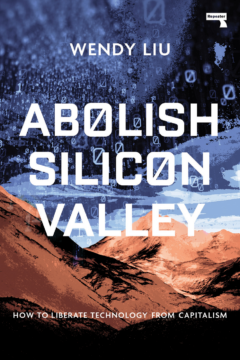 Abolish Silicon Valley: How to Liberate Technology from Capitalism Repeater Books
Wendy Liu, Tariq Goddard
PublisherRepeater Books2020
Formats
Subjects
Keywords
Innovation. Meritocracy. The possibility of overnight success. What’s not to love about Silicon Valley? These days, it’s hard to be unambiguously optimistic about the growth-at-all-costs ethos of the tech industry. Public opinion is souring in the wake of revelations about Cambridge Analytica, Theranos, and the workplace conditions of Amazon workers or Uber drivers. It’s becoming clear that the tech industry’s promised “innovation” is neither sustainable nor always desirable. Abolish Silicon Valley is both a heartfelt personal story about the wasteful inequality of Silicon Valley, and a rallying call to engage in the radical politics needed to upend the status quo. Going beyond ...

Dead Precedents: How Hip-Hop Defines the Future Repeater Books
Roy Christopher, Johnny Bull
PublisherRepeater Books2018
Format
Subjects
Keywords
In Dead Precedents, Roy Christopher traces the story of how hip-hop invented the twenty-first century. Emerging alongside cyberpunk in the 1980s, the hallmarks of hip-hop — allusion, self-reference, the use of new technologies, sampling, the cutting and splicing of language and sound — would come to define the culture of the new millennium. Taking in the ground-breaking work of DJs and MCs, alongside writers like Dick and Gibson, as well as graffiti and DIY culture, Dead Precedents is a counter-cultural history of the twenty-first century, showcasing hip-hop’s role in the creation of the world in which we now live.

Discognition Repeater Books
Steven Shaviro, Johnny Bull, Jan Middendorp
PublisherRepeater Books2016
Format
Subject
Keywords
What is consciousness? What is it like to feel pain, or to see the colour red? Do robots and computers really think? For that matter, do plants and amoebas think? If we ever meet intelligent aliens, will we be able to understand what they say to us? Philosophers and scientists are still unable to answer questions like these. Perhaps science fiction can help. In Discognition, Steven Shaviro looks at science fiction novels and stories that explore the extreme possibilities of human and alien sentience. 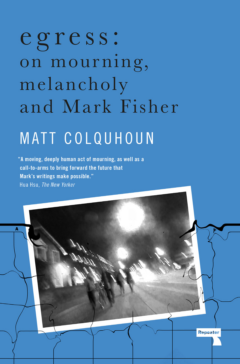 Egress: On Mourning, Melancholy and Mark Fisher Repeater Books
Matt Colquhoun, Mark Fisher, Johnny Bull
PublisherRepeater Books2020
Format
Subjects
Keywords
Egress is the first book to consider the legacy and work of the writer, cultural critic and cult academic Mark Fisher. Narrated in orbit of his death as experienced by a community of friends and students in 2017, it analyses Fisher’s philosophical trajectory, from his days as a PhD student at the University of Warwick to the development of his unfinished book on Acid Communism. Taking the word “egress” as its starting point — a word used by Fisher in his book The Weird and the Eerie to describe an escape from present circumstances as experiences by the characters in countless examples ...

Futures and Fictions Repeater Books
Henriette Gunkel, Ayesha Hameed, Simon O’Sullivan, et al.Oreet Ashery, Kemang Wa Lehulere, Elvira Dyangani Ose, Robin Mackay, Julian Henriques, Harold Offeh, Annett Busch, Mark Fisher, [13 More...]
PublisherRepeater Books2017
Format
Subjects
Keywords
In what ways could we imagine a world different from the one in which we currently live? This is the question addressed by the essays and conversations in Futures and Fictions, which explore possibilities for a different “political imaginary”. With discussions around decolonization, new Afro- and other futurisms, post-capitalism, science fiction, and new kinds of social movements – and the intersections of these with contemporary art practice and visual culture – Futures and Fictions creates a space for alternate narratives and image-worlds that might be pitched against our neoliberal present. With contributions from Mark Fisher, Ursula Le Guin, Kodwo Eshun ... 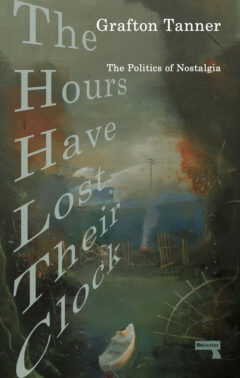 The Hours Have Lost Their Clock Repeater Books
Grafton Tanner
PublisherRepeater Books2021
Formats
Subjects
Keywords
Nostalgia is the defining emotion of our age. Political leaders promise a return to yesteryear. Old movies are remade and cancelled series are rebooted. Veterans reenact past wars, while the displaced across the world long for home. But who is behind this collective ache for a home in the past? Do we need to eliminate nostalgia, or just cultivate it better? And what is at stake if we make the wrong choice? Moving from the fight over Confederate monuments to the birth of homeland security to the mourning of species extinction, Grafton Tanner traces nostalgia’s ascent in the twenty-first century, revealing ... 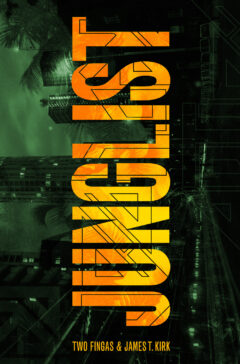 Junglist Repeater Books
James T Kirk, Two Fingas, Eddie Otchere, et al.Andrew Green, Sukhdev Sandhu, Frederik Jehle
PublisherRepeater Books2021
Format
Subject
Keywords
Back in print after two decades, Junglist tells the compelling, comic, stream-of-consciousness story of four young Black men coming of age among the raves and Jungle music scene in London during the 1990s. Layered with poetic verse, prose and humour, this cult classic of underground British fiction documents the rollercoaster ride of a weekend spent raving during Jungle’s cultural takeover in the summer of 1994. Jungle, with its booming basslines and Jamaican patois, burst from the pirate radio stations and mixtapes into cavernous clubs, pulling a generation of Black British ravers with it. Originally written as a way to document street ... 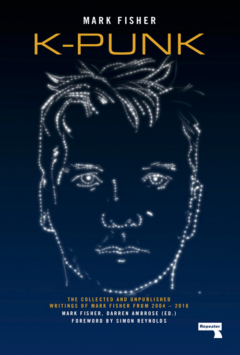 k-punk: The Collected and Unpublished Writings of Mark Fisher (2004-2016) Repeater Books
Mark Fisher, Darren Ambrose, Simon Reynolds, et al.Johnny Bull, Frederik Jehle
PublisherRepeater Books2018
Format
Subject
Keywords
Edited by Darren Ambrose and with a foreword by Simon Reynolds, this comprehensive collection brings together the very best work of acclaimed blogger, writer, publisher, political activist and lecturer Mark Fisher (aka k-punk) who died in 2017. Covering the period 2004–2016, it includes some of the most incendiary and influential posts from his seminal blog k-punk, as well as a selection of his brilliantly insightful film, television and music reviews, together with his extraordinary writings on politics, activism, precarity, hauntology, mental health and popular modernism for numerous websites and magazines. Also included is his final unpublished k-punk post, the unfinished ...

Mad Skills: MIDI and Music Technology in the Twentieth Century Repeater Books
Ryan Alexander Diduck, Georgina Born, Johnny Bull
PublisherRepeater Books2017
Format
Subjects
Keywords
Part rigorous history, part insightful commentary, and part memoir, Mad Skills tells the story behind MIDI, through the twentieth century’s kaleidoscopic lens. Guiding us across one hundred years of musical instruments, and the music made with them, it recounts the technical and creative innovations that led to the making of the most vital, long-standing, ubiquitous, and yet invisible music technology of our time. 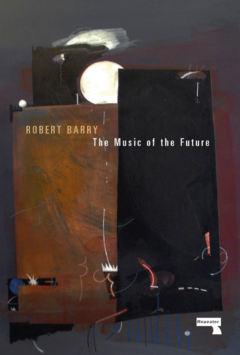 The Music of the Future Repeater Books
Robert Barry, Johnny Bull, Josse Pickard
PublisherRepeater Books2017
Format
Subjects
Keywords
The Music of the Future is not a book of predictions or speculations about how to save the music business or the bleeding edge of technologies. Rather, it’s a history of failures, mapping 200 years of attempts by composers, performers and critics to imagine a future for music. Encompassing utopian dream cities, temporal dislocations and projects for the emancipation of all sounds, The Music of the Future is in the end a call to arms for everyone engaged in music: “to fail again, fail better.” 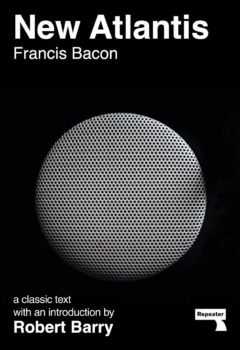 New Atlantis Repeater Books
Francis Bacon, Robert Barry
PublisherRepeater Books2020
Formats
Subjects
Keywords
In the early seventeenth century, at the very end of his life, the English statesman and philosopher Francis Bacon wrote a utopian fable called New Atlantis, containing an uncanny presentiment of twentieth-century electronic music. Now, four hundred years ago, music writer Robert Barry digs into the significance of that tale for the history of music, media, science and the senses. New Atlantis marked a significant turning point in the history of utopian literature — not to mention the pre-history of science fiction, and even modern science itself. At the heart of the island paradise stumbled upon by Bacon’s stranded sailors is ... 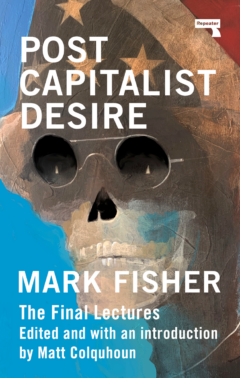 Postcapitalist Desire: The Final Lectures Repeater Books
Mark Fisher, Matt Colquhoun
PublisherRepeater Books2020
Format
Subjects
Keywords
Edited and with an introduction by Matt Colquhoun, this collection of lecture notes and transcriptions reveals acclaimed writer and blogger Mark Fisher in his element — the classroom — outlining a project that Fisher’s death left so bittersweetly unfinished. Beginning with that most fundamental of questions — “Do we really want what we say we want?” — Fisher explores the relationship between desire and capitalism, and wonders what new forms of desire we might still excavate from the past, present, and future. From the emergence and failure of the counterculture in the 1970s to the continued development of his left-accelerationist line ...
1 2 Next