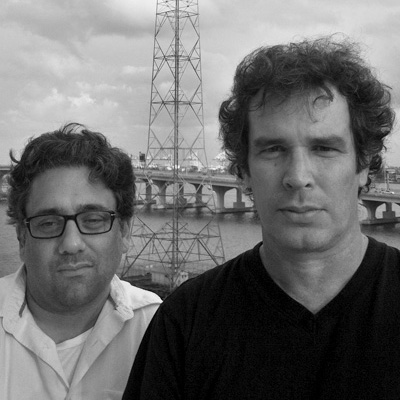 This podcast is the first one to have two guests, Miami-based artists, writers and editors Gean Moreno and Ernesto Oroza, for an account of their collaborative work manifested in several texts and exhibitions. This conversation focuses on their analysis of “Generic Objects” that allows the optimal function of globalized capitalism (containers, cranes, ships, highways, palettes, buckets, etc.) through a universal metric system, as well as a more local tinkering of these objects in Miami’s Little Haiti for a more local economic form. It concludes the short series of podcasts in Miami.

Gean Moreno is an artist and writer based in Miami. His work has been exhibited at the North Miami MoCA, Kunsthaus Palais Thum and Taxis in Bregenz, Institute of Visual Arts in Milwaukee, Haifa Museum in Israel, Arndt & Partner in Zürich, and Invisible-Exports in New York. He has contributed texts to various magazines and catalogues. In 2008, he founded [NAME] Publications. See his Funambulist contributor page.

Ernesto Oroza is an artist, designer and writer based in Aventura, USA. He earned a degree at the Havana Superior Institute of Design. Oroza is author of the book Objets Réinventés. La création populaire à Cuba (Paris, 2002). He was visiting professor in Les Ateliers, École Nationale Supérieure de Création Industrielle (ENSCI) in Paris, and professor at the Polytechnic Institute of Design of Havana from 1995 to 2000. His work has been exhibited in museums, galleries, and cultural spaces such as Haute Definition Gallery, in Paris, The Montreal Museum of Fine Arts, Montreal, The Museum of Modern Art (MoMA), in New York, and Laboral Centro de Arte, in Spain. See his Funambulist contributor page.