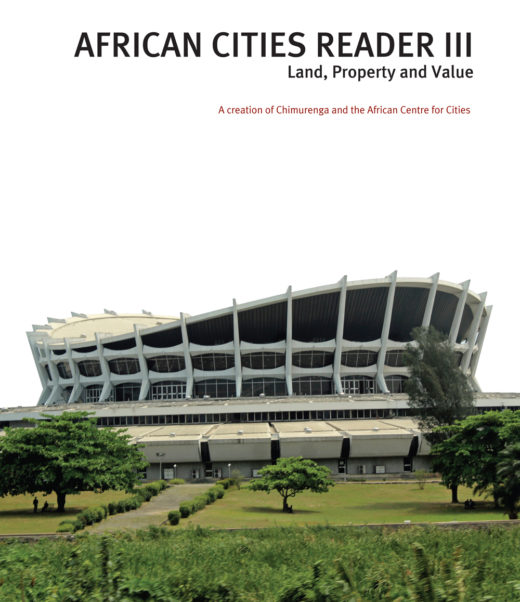 The third African Cities Reader explores the unholy trinity of land, property and value – the life force of cities everywhere. In an era of late modernity marked by a speculative compulsion that takes on a spectral character as it instigates adventures of city imagineering, deal-making and symbolic reinvestment, the material effects are often displacement, violence, daylight robbery and yet another round of elite seduction. The incessant (re) making of the African city is a game that leaves few untouched or unmoved and literally prepares the ground for the inhabitation of another 400 million urban dwellers over the next two decades.

Land, property and value can only be understood through the passageway of colonial violence and its manifold psychic, cultural, political, economic and spiritual legacies. The very basis of land ownership, property ascription and concomitant valuations remain trapped in an unspoken, and in some ways, unspeakable cultural erasure. Racking through these ruins is essential to break through the normalisation work of contemporary policies, legal frameworks and de facto orders of rule.

That said, the sheer force of necessity of urban majorities across the continent has also produced a wide- ranging set of “anarchic” and unruly practices that may not add up to a grand alternative, but certainly offer intelligence about other imaginaries and the potential of destabilisation and hybridisation. (After all, only 3 per cent of urban dwellers in sub-Saharan Africa earn enough to qualify for a mortgage). The Reader offers a few examples of performative strategies, which seek to tap these energies as a way of gesturing beyond our truncated horizons. It is essential to pay close attention to these efforts because they offer a vantage point from which to take in all the dramatic enterprise afoot to establish “urban fantasies”, tenure security, predictable real estate markets and propertied classes.

Almost every large African city boasts at least one “new town” development ambition, whereby governments are joined by various new world investors to establish alternative urban worlds, typically unmoored from the real city. These “cities” (such as the one in Luanda discussed in the Reader) are the soft landing beacons for international capital. They are endowed with the symbolic capital to prove the ef ciency, aspiration, modernity, connectivity and digital smarts of the current crop of African leaders, who are championing Afro-optimism.

Of course, as many contributors in the volume intimate, this wave of city-building is simply an exercise in futility, with profoundly violent consequences for the families and businesses that are removed to make room for the smart city. It is not only those who are directly impacted upon, but also entire cultural systems are put out of joint by the rapacious effects of narrow private property dogmas. One of the surprising themes in this edition is the close and complicated connection between land and death. The dead continue to be haunted by historical land-based displacement because the ancestors do not necessarily partake in urban-based land- use and burial practices, setting off profound familial and communal con icts; dramas that underscore how important it is to not simply approach land through a futurial lens – potential value that can be realised through appreciation – but rather to understand that past mendacities are running wild to catch up with the future.

It took us much longer than planned to bring this issue into the world. A variety of allied publications (The Chronic, Cityscapes, Rogue Urbanism and Africa’s Urban Revolution) and cultural interventions ate time and attention.