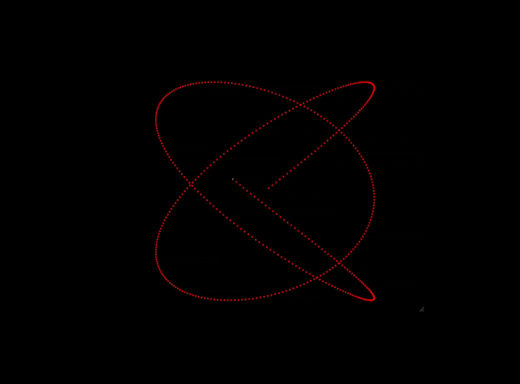 After His Beautiful Machine of 1855 O-R-G Screensavers

Two signals of varying frequency and phase result in a perpetual infinity (figuratively and literally as it actually constructs itself in the shape of the infinity sign given the right starting values), drawing and redrawing itself over and over, a picture of timing and sequence in the center of the screen. The familiar resulting shapes are known as Lissajous curves after French mathematician Jules Antoine Lissajous and his “beautiful machine” of 1855.

Devised to draw a picture of two superimposed systems falling into and out of phase, Lissajous’ machine was constructed of a pair of tuning forks placed facing at right angles, each with a mirror attached. The light source is focused through a lens, bouncing off the first onto the second and projecting to a large screen a few feet away. As the tuning forks are struck and tones are produced, simple vibrations begin to move the mirrors in a regular oscillating pattern. The projected image forms the strange and beautiful curves of a Lissajous figure that result from viewing a two-variable parametric equation calculate and recalculate itself over time.