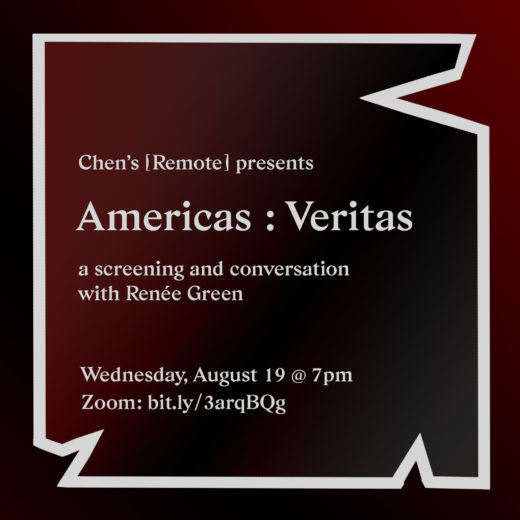 “Americas : Veritas” features Le Corbusier’s only two structures built in the American continent–Harvard University’s Carpenter Center for the Visual Arts, in Cambridge, Massachusetts, and Casa Curutchet, in La Plata, Argentina–while “Commemorative Toile: Mise-en-scène” revisits a homonymous wallpaper and textile installation made by Green in 1991/1993, which focused on the history of a pervasive textile and its motifs, as well as the artist’s interpretation of them.

Tracing an arch that connects a European 17th century textile grounded on the triangular trade to Le Corbusier’s utopian architectural dreams for the Americas, these films will serve as a springboard from which to reflect on Green’s ongoing practice and thinking in yet another summer in America.

Renée Green
Renée Green is an artist, writer, and filmmaker. Her exhibitions, videos, and films have been seen throughout the world in museums, biennales, and festivals. A selection of her books includes Other Planes of There: Selected Writings, Endless Dreams and Time-Based Streams, and Ongoing Becomings. Pacing, her two-year project at the Carpenter Center for Visual Arts, Harvard University, culminated in the Spring 2018 with Within Living Memory, an exhibition inhabiting all public spaces of Le Corbusier’s building. She is also a Professor at the MIT Program in Art, Culture and Technology.