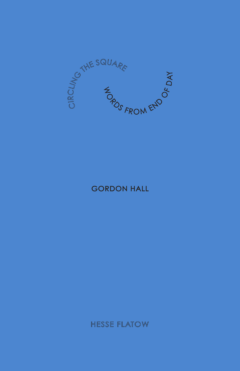 Circling the Square: Words from END OF DAY
Gordon Hall, Mira Dayal, Gordon Hall, et al.Roya Amirsoleymani, Math Bass, Nicole Eisenman, Rami George, David J. Getsy, Danny Giles, Jason Hendrik Hansma, Corin Hewitt, [8 More...]
PublisherHesse Flatow2021
Format
Subjects
Keywords
Gordon Hall’s version of this oddly gendered furniture item is riddled with tiny nails, a laboriously achieved decorative feature that resembles reptilian skin, silvery and shifting in the sunlight. Here it stands, drained of use but suggestive of function, stiff but body-like, in the gallery. These tensions in the clothes valet point to a sense of animacy that threads through the enigmatic works in Hall’s exhibition, which shares the clothes valet’s name: END OF DAY. While most of the works hover on the edge of domestic function—a table, a chair, a bench, folded linens—they veer in unexpected directions. The leg ...

Equal Equal #1 Equal Equal (==)
Matt Keegan, Sarah Charlesworth, Carter Mull, et al.Chris Kraus, Nora Schultz, Liz Deschenes, Nikolas Gambaroff, Ed Atkins, Steve Reinke, James Richards, Alejandro Cesarco, [16 More...]
PublisherMichele Didier2012
Formats
Subjects
Although it looks like it, == is not the catalogue of an exhibition. It is exactly the opposite, it is an independent project, conceived ahead of an exhibition. In fact, Matt Keegan has devised an exhibition from the publication, rather than the traditional reverse. Even more, an unlimited number of venues may be produced. Emphasizing the wall as a page, each one provides a temporary container for ==’s various parts, allowing Matt Keegan to act as the protagonist for the fictive curatorial project.